The Kingdom of Ohio

After discovering an old photograph, an elderly antiques dealer living in present-day Los Angeles is forced to revisit the history he has struggled to deny. The photograph depicts a man and a woman. The man is Peter Force, a young frontier adventurer who comes to New York City in 1901 and quickly lands a job digging the first subway tunnels beneath the metropolis. The woman is Cheri- Anne Toledo, a beautiful mathematical prodigy whose memories appear to come from another world. They meet seemingly by chance, and initially Peter dismisses her as crazy. But as they are drawn into a tangle of overlapping intrigues, Peter must reexamine Cheri-Anne's fantastic story. Could it be that she is telling the truth and that she has stumbled onto the most dangerous secret imaginable: the key to traveling through time?

Set against the mazelike streets of New York at the dawn of the mechanical age, Peter and Cheri-Anne find themselves wrestling with the nature of history, technology, and the unfolding of time itself".

Churchill's Secret Agent: A Novel Based on a True Story

by Max and Linda Ciampoli

"Based upon Max Hardonniere's own experience as a covert operative during World War II, this is the story of a young man whose acquaintance with Prime Minister Winston Churchill would lead to him being recruited and trained as a spy who would fight his own war from behind enemy lines". 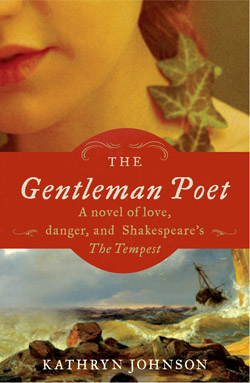 Giveaway Winner for The Gentleman Poet: A Novel of Love, Romance, and Shakespeare’s “The Tempest” by Kathryn Johnson is.....
Rachel
Amazon
The Kingdom of Ohio
Churchill's Secret Agent: A Novel Based on a True Story

The Gentleman Poet: A Novel of Love, Danger, and Shakespeare's The Tempest