As I had mentioned before it is time to get into some of the darker Pre-Raphaelites. I figured that starting with this one that has my new favorite leading lady Queen Eleanor of Aquitaine would be perfect. Since I just finished reading "The Queen's Pawn" by Christy English, this is the best starting point to explore some of the darker, more sinister Pre-Raphaelites. Fair Rosamund is not a leading character in "The Queen's Pawn" but is briefly mentioned in Eleanor's thoughts. I would eventually love to read a book on Rosamund but at this moment nothing has peeked my interest. 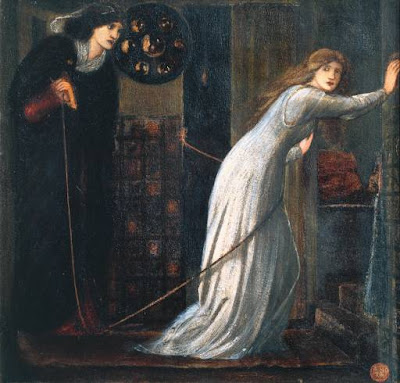 Pen and ink, watercolour, gouache and gum on paper
"Burn-Jones manages to convey Rosamund's very real terror as she realizes she is unable to escape. Her face, swollen as though with tears, demands sympathy from the viewer; Eleanor's face, determined and cold, only serves to create in the viewer  a dislike for he queen. The artist required the viewer to feel sympathy for the mistress, not the wife; this is in  direct opposition to the prevalent Victorian attitude. Similarly contrary is the artist's decision to clothe the king's mistress in a virginal pale gown, and his wife in witch-like black".
"Burne-Jones treated the story of Fair Rosamund several times in the early 1860s. According to legend, King Henry II created a hidden chamber for his mistress, Rosamund, at the centre of an elaborate maze. There she was discovered and murdered by her rival, Queen Eleanor. While he was a student at Oxford, Burne-Jones visited Godstowe, the presumed site of Rosamund's grave. But a fresh impetus for his group of pictures came from Swinburne's verse drama of 1860, which enacts the confrontation of Rosamund and the Queen". The Tate Gallery 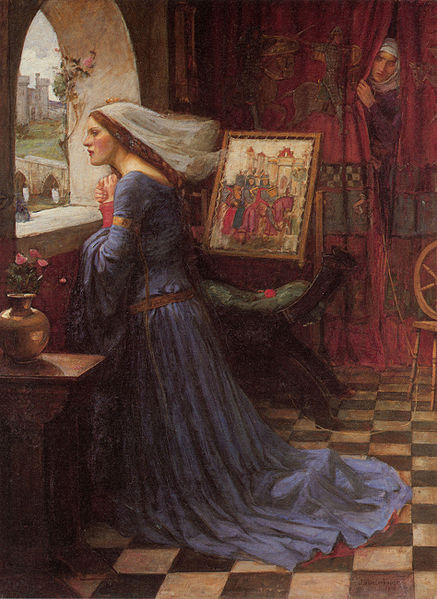 Oil on canvas
Stay tuned next Sunday for more Pre-Raphaelites and I hope you all enjoyed this one.