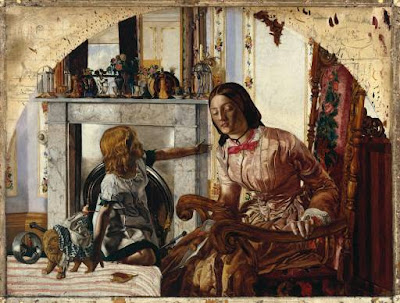 Frederic George Stephens 1828-1907
The "Mother and Child" seemed only fitting today to feature for Sundays Art. This piece is abundant in hidden symbolism. The scene of domestic bliss has an underlining commentary on the Crimean War. The war was fought by British soldiers between 1854-1856. The child's toys on the table represent a few things. The lion symbolizes Britain and the solider in the circle is symbolic for Russia. The lion is represented as being far superior in stature. The use of child's toys indicate that Stephens feelings of anger at the conflict and at the way the solders were being used as pawns.
The anguished expression of the mother and the letter in her right hand suggest that her husband has been killed or wounded in the Crimea. The child's futile attempts to offer consolation for something it can't understand and emphasizes the helplessness of the women who were left home alone while their men disappeared to fight a war far away.
Sadly I can relate to this mothers anguish, my younger brother earlier this year returned back home from his seccond tour of duty in Iraq. I had many sleepless nights thinking about his safety. 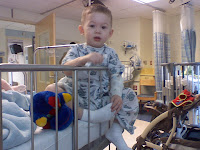 On another note today is the two year anniversary of my son's release from the hospital. Upon his release his case was officially labeled misdiagnosis of cancer. Here is to happy year number two and nothing will ever beat my mothers day present two years ago. A healthy happy child that was going to be just fine. When he was sick I was so afraid to leave him that I bought a picture frame that had a voice recorder. I recorded him singing "Twinkle Twinkle little star" so that on the nights that I had (was forced) to go home I remember laying in my bed replaying it over and over until I would fall asleep. A mothers love is a force of nature that makes every fiber of your being cry out to the heavens , thank you for this wonderful chance I have to be a mother. Maybe that is why when in times of distress mothers have been known to have super human powers.
Happy mothers day to all the wonderful mothers out there, I hope you are all having a wonderful holiday with your children.