In honor of the men and women who have served our country to help give us a better life, I thank you from the bottom of my heart. Happy memorial day we do love you! 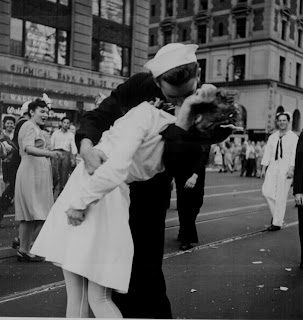 Alfred Eisenstaedt of LIFE took the photograph of a sailor kissing a nurse at the Times Square celebration on August 15, 1945, at the end of World War II. The photograph was one of many Eisenstaedt took that day, and he didn�t bother getting the names of anyone. Only after seeing the proofs did he realize that he had captured a decisive moment. On the 50th anniversary of the photograph, the couple was identified as Edith Shain and Carl Muscarello".

In my mailbox this week,
"Mistress of the Art of Death" by Ariana Franklin 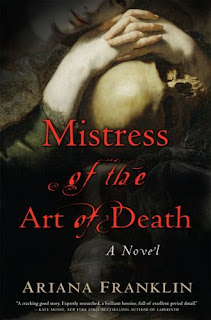 "In medieval Cambridge, England, Adelia, a female forensics expert, is summoned by King Henry II to investigate a series of gruesome murders that has wrongly implicated the Jewish population, yielding even more tragic results. As Adelia's investigation takes her behind the closed doors of the country's churches, the killer prepares to strike again".

"Had Ellis Peters's Brother Cadfael been born a few decades later, he might have found a worthy associate and friend in Dr. Vesuvia Adelia Rachel Ortese Aguilar of Salerno, a short and short-tempered medieval coroner hired in secret by King Henry II to find out who's behind the horrific murders of Christian children in Cambridge, England. Prominent local Jews stand accused; Henry wants them freed, mostly for the sake of their tax revenue. As Adelia examines the children's bodies and gets to know the people of Cambridge, she has no trouble assembling a long list of suspects, but she encounters considerable difficulty trying to narrow it down, a struggle in which the reader gladly joins her. Not all of the plot twists are surprising and the romantic subplot is an unnecessary afterthought, but Franklin (City of Shadows) has developed a skillful blend of historical fact and gruesome fiction that's more than sufficient to keep readers interested and entertained".