Since I am sporadic at posting mailbox Monday's it is only fair that I state that this is 2-3 weeks worth of books.

On another Note Congradulations to...

Little Tesoro
For winning the giveaway for "Nine Rules to Break when Romancing a Rake" by Sarah Maclean. I hope you enjoy the read!

For the King by Catherine Delors, for HFBRT event
"For her first novel, Mistress of the Revolution, which the Associated Press dubbed one of the "best reads of the year," Catherine Delors earned comparisons to Tracy Chevalier and Philippa Gregory. In For the King, she again demonstrates her matchless ability to illuminate key turning points in history while weaving a gripping story about a man caught between his heart and his integrity.

The Reign of Terror has ended, and Napoléon Bonaparte has seized power, but shifting political loyalties still tear apart families and lovers. On Christmas Eve 1800, a bomb explodes along Bonaparte's route, narrowly missing him but striking dozens of bystanders. Chief Inspector Roch Miquel, a young policeman with a bright future and a beautiful mistress, must arrest the assassins before they attack again. Complicating Miquel's investigation are the maneuverings of his superior, the redoubtable Fouché, the indiscretions of his own father, a former Jacobin, and two intriguing women.

Based on real events and characters and rich with historical detail, For the King takes readers through the dark alleys and glittering salons of post-revolutionary Paris and is a timeless epic of love, betrayal, and redemption".

How To Mellify A Corpse by Vicki Leon
"In How to Mellify a Corpse, Vicki León brings her particular hybrid of history and humor to the entwined subjects of science and superstition in the ancient world, from Athens and Rome to Mesopotamia, the Holy Land, Egypt, and Carthage. León covers subjects as diverse as astronomy and astrology, philosophy and practicalities of life and death (including the titular ancient method of embalming), and ancient mechanical engineering. How to Mellify a Corpse of course invokes legendary thinkers (Pythagoras and his discoveries in math and music, Aristotle's books on politics and philosophy, and Archimedes' "Eureka" moment), but it also delves deeply into the lives of everyday people, their understanding and beliefs.
A feast for the curious mind, How to Mellify a Corpse is not only for those with an interest in the experimental: it's for anyone who's inspired by the imagination and ingenuity humanity uses to understand our world".

Alice I have Been by Melanie Benjamin
"Starred Review. Benjamin draws on one of the most enduring relationships in children's literature in her excellent debut, spinning out the heartbreaking story of Alice from Alice's Adventures in Wonderland. Her research into the lives of Charles Dodgson (aka Lewis Carroll) and the family of Alice Liddell is apparent as she takes circumstances shrouded in mystery and colors in the spaces to reveal a vibrant and passionate Alice. Born into a Victorian family of privilege, free-spirited Alice catches the attention of family friend Dodgson and serves as the muse for both his photography and writing. Their bond, however, is misunderstood by Alice's family, and though she is forced to sever their friendship, she is forever haunted by their connection as her life becomes something of a chain of heartbreaks. As an adult, Alice tries to escape her past, but it is only when she finally embraces it that she truly finds the happiness that eluded her. Focusing on three eras in Alice's life, Benjamin offers a finely wrought portrait of Alice that seamlessly blends fact with fiction. This is book club gold".

Uppity women of Medieval Times by Vicki Leon
"Our age doesn't have a lock on outspoken women, as Vicki Leon proves in this impudent, flippant history of the Middle Ages. In the 1600s, Lady Castlehaven charged her husband with rape and had his connubial rights--and head--removed. Prioress Eglentyne, who appears in Chaucer's Canterbury Tales, fell afoul of clerical colleagues by ignoring rules about "dress, dogs, dances" and worse yet, "wandering in the world." And let's not forget Isabel, Queen of Castile, patron of Columbus, and wife to Ferdinand. Her marriage motto was "They rule with equal rights and both excel, Isabel as much as Ferdinand, Ferdinand as much as Isabel."
Library sale
Catherine of Aragon by Jean Plaidy, Hardback Gift for Arleigh
Mozart's women by Jane Glover
The Book of Eleanor by Pamela Kaufman

Girl in Translation by Jean Kwok
"A resolute yet naïve Chinese girl confronts poverty and culture shock with equal zeal when she and her mother immigrate to Brooklyn in Kwok's affecting coming-of-age debut. Ah-Kim Chang, or Kimberly as she is known in the U.S., had been a promising student in Hong Kong when her father died. Now she and her mother are indebted to Kimberly's Aunt Paula, who funded their trip from Hong Kong, so they dutifully work for her in a Chinatown clothing factory where they earn barely enough to keep them alive. Despite this, and living in a condemned apartment that is without heat and full of roaches, Kimberly excels at school, perfects her English, and is eventually admitted to an elite, private high school. An obvious outsider, without money for new clothes or undergarments, she deals with added social pressures, only to be comforted by an understanding best friend, Annette, who lends her makeup and hands out American advice. A love interest at the factory leads to a surprising plot line, but it is the portrayal of Kimberly's relationship with her mother that makes this more than just another immigrant story".

Prima Donna by Megan Chance
"At the start of Chance's heady if at times overheated Victorian historical, Sabine Conrad, an ambitious opera singer wounded in a violent encounter whose significance doesn't become clear until later, flees New York City with her jewels. Months later, in February 1878, the by now penniless Sabine reaches Seattle, Washington Territory, where she gets a job as a scrub woman at the Palace, a whore house that provides musical entertainment in the frontier city's red-light district. Sabine, who's adopted the name Margie Olson, helps the Palace's proprietor, Johnny Langford, realize his dream of turning the place into a legitimate theater. Chance (The Spiritualist) deftly explores the hardships the former prima donna endures overseeing Langford's entertainers, even as Sabine yearns to return to the stage herself. Melodramatic excerpts from Sabine's youthful journal chronicling her opera career provide counterpoint in an erotic thriller full of lively period detail".

Six Wives, The Queens of Henry VIII by David Starkey
"No one in history had a more eventful career in matrimony than Henry VIII. His marriages were daring and tumultuous, and made instant legends of six very different women. In this remarkable study, David Starkey argues that the king was not a depraved philanderer but someone seeking happiness -- and a son. Knowingly or not, he elevated a group of women to extraordinary heights and changed the way a nation was governed.
Six Wives is a masterful work of history that intimately examines the rituals of diplomacy, marriage, pregnancy, and religion that were part of daily life for women at the Tudor Court. Weaving new facts and fresh interpretations into a spellbinding account of the emotional drama surrounding Henry's six marriages, David Starkey reveals the central role that the queens played in determining policy. With an equally keen eye for romantic and political intrigue, he brilliantly recaptures the story of Henry's wives and the England they ruled". 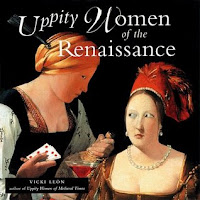 Uppity Women of the Renaissance by Vicki Leon
"Introducing some of history's most dangerous, outrageous, and flamboyant women, Uppity Women of the Renaissance introduces readers to ex-nun Catalina de Erauso, who dueled, drank, and cross-dressed her way through Spain and North America; Chiyome, who started a profitable business renting out female ninjas, called "deadly flowers," in 16-century Japan; and Zubayda, an Arab engineer who, when she wasn't busy building aqueducts, roads, or entire cities, found time to throw lavish, Martha Stewart-style parties. Covering wide geographical ground and combining meticulous historical research, period artwork, and a rollicking sense of humor, this latest volume in the Uppity Women series profiles more than 200 heroines, hussies, and harpies of the fourteenth through the 17th centuries".