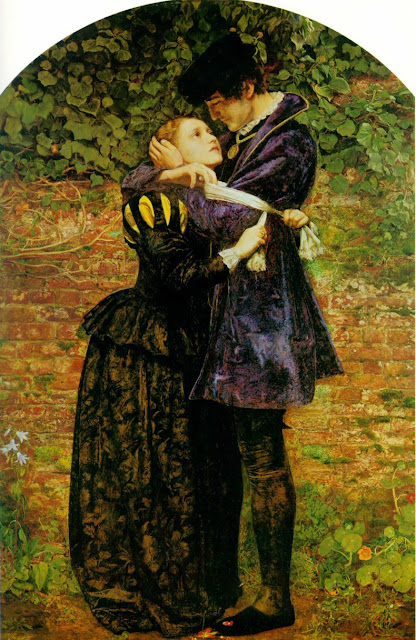 To coincide with the HFBRT event of "The Confessions of Catherine De Medici" by C.W. Gortner. I have been saving this one for a loooooong time, this post actually is the very first post I ever made on The Pre-Raphaelites. I was waiting to see how I felt about this painting after my read on Catherine De Medici and it was well worth the wait. This is a moving piece that I have to admit is my favorite of them along with the Highlander.

Sir John Everett Millais (1829-1896)
A Huguenot, on St. Bartholomew's Day, Refusing to Shield Himself from Danger by Wearing the Roman Catholic Badge.

"It harks back to Paris of 1572, when many hundreds of French Protestants (Huguenots) were massacred by Catholic hoards. It was decreed that all Catholics should wear a white band on one arm and a cross in their hats to avoid the slaughter.
Millais portrays a Catholic woman's desperate attempt to shield her Huguenot lover, and his determined refusal to deny his religion. The crushed red flower at their feet is symbolic of his certain death."
Pre-Confessions thoughts
I do not have very much background on the St Bartholomew's massacre which leads me to the point that I have no history I can relate this to. One thing that does strike me is not only the longing in the woman's expression but the smile he gives her like this is the right thing to do, I have to be brave and I have to take my stand even if it means my life.
It is reminiscent of another time when a select group of people were excluded in Europe and forced to wear the mark of their religion.

Post-Confessions thoughts
Wow, that was really interesting I really had no idea how much politics was involved in the massacre. Gortner brought light on a very dark time in France for me. I had no idea it was that brutal or brought about in such a conniving way. This just proves that Gortner is far from the typical boring read. 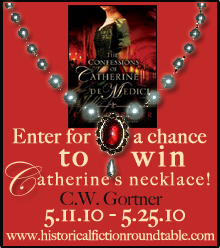 
In the group schedule for today:
Friday, May 14th – Re-cap of CW Gortner’s books at the HFBRT, “The Woman Behind the Legend,” A Guest Post by CW Gortner at Passages to the Past, Book Review by Allie at Hist-Fic Chick.

Thursday, May 13th - Round Table Discussion Q&A at the HFBRT,  Catherine de Medici’s Gift + Nostradamus Giveaway at Enchanted by Josephine, Book Review by Heather at The Maiden’s Court.


Wednesday, May 12th – “Two Women, One King,” A Guest Post by CW Gortner at Hist-Fic Chick, Book Review by Amy at Passages to the Past.
Tuesday, May 11th – Giveaway: Win Catherine’s Necklace! at the HFBRT, “Nostradamus – Visionary or the Best Fraud Ever” by Heather at The Maiden’s Court, Book Review by Arleigh at historical-fiction.com.