Giveaway and Guest Post on By Fire, By Water by Mitchell James Kaplan 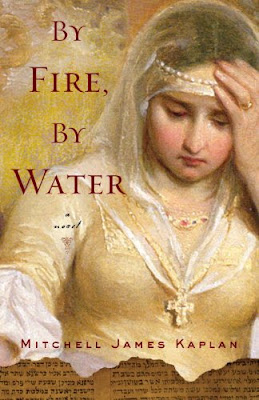 "Luis de Santángel, chancellor to the court and longtime friend of the lusty King Ferdinand, has had enough of the Spanish Inquisition. As the power of Inquisitor GeneralTomás deTorquemada grows, so does the brutality of the Spanish church and the suspicion and paranoia it inspires. When a dear friend’s demise brings the violence close to home, Santángel is enraged and takes retribution into his own hands. But he is from a family of conversos, and his Jewish heritage makes him an easy target. As Santángel witnesses the horrific persecution of his loved ones, he begins slowly to reconnect with the Jewish faith his family left behind. Feeding his curiosity about his past is his growing love for Judith Migdal, a clever and beautiful Jewish woman navigating the mounting tensions in Granada. While he struggles to decide what his reputation is worth and what he can sacrifice, one man offers him a chance he thought he’d lost…the chance to hope for a better world. Christopher Columbus has plans to discover a route to paradise, and only Luis de Santángel can help him.
Within the dramatic story lies a subtle, insightful examination of the crisis of faith at the heart of the Spanish Inquisition. Irresolvable conflict rages within the conversos in By Fire, By Water, torn between the religion they left behind and the conversion meant to ensure their safety. In this story of love, God, faith, and torture, fifteenth-century Spain comes to dazzling, engrossing life".
Rules
* For 1 entry leave me a comment with a way to contact you. No Email No Entry.
* For 2 entries follow my blog. If you already do, thanks, and please let me know in the comments. You're eligible for the extra entry as well.
* For 3 entries blog or tweet this giveaway to spread the word.
This is for a Finished copy of book from the publisher, the book is a paperback original, and we’ll ship to US/Canada only.
Giveaway will run until May 24th at midnight and I will announce the winner on the 25th of May. Good Luck to All and let the giveaway BEGIN!

I am proud to announce that in addition to the giveaway please welcome Mitchell James Kaplan to Historically Obsessed. He was gracious enough to write a really cool guest post for my readers.  I hope you all enjoy it and thank you Mitchell for paying a visit.


What Was The Inquisition?
The term “inquisition” comes from the same root as “to inquire.” Its meaning is similar to the modern word “investigation.” Inquisitions were tribunals (or courts) of the church whose purpose was to purify the Christian world of false religion.

To the modern mind, it may seem aberrant that any organization should care about the private beliefs of its members. The idea of thought control horrifies us. Keep in mind, though, that:

–    In a time when religious doctrine was viewed as absolute truth, deviance from that doctrine constituted the greatest possible danger for any individual, let alone for a society.

–    The divine punishment for heresy, it was believed, was eternal damnation. No conceivable punishment in this world could be as terrible as hell.

–    By eliminating the false beliefs of individuals, the church sought not just to rid its body of a pernicious infection, but more importantly to prevent the spread of that infection.

–    During the medieval period, Europe consisted of many small centers of power, with no unifying authority save the Church of Rome. Local rulers competed violently. Forces from outside Christendom threatened total destruction. The power of the church to hold the Christian world together was limited. From Rome’s point of view, if uniformity of belief was not enforced, the unity of the Christian world was at stake. If unity was lost, that world would crumble.

–    Most of the inhabitants of the medieval world were illiterate and uneducated. Leaders knew well that these people were vulnerable to ideologies which they viewed as absurd and destructive. The church considered itself obligated to educate the citizenry in the most basic and important knowledge available to mankind, the knowledge of God.

Beginning with the inquisition against the Cathars in the 12th century, many distinct tribunals were established in many places. Some of these inquisitions were severe in their methods, employing a wide range of torture machines to extract the truth from the accused and subjecting the guilty to cruel punishments. Others were mild, aiming simply to correct the misguided and send them home.

Using the term “inquisition” globally to refer to the common attributes of these tribunals, it’s important to point out what the inquisition was not: