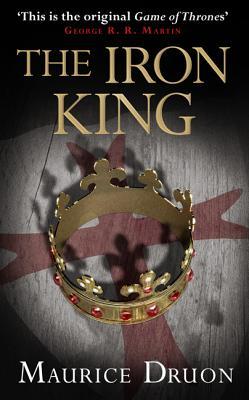 The Iron King, Philip the fair ruled France with an iron fist. Hard as a rock he was unmovable when it came to his will as king. His eldest daughter Isabella was the very unhappy Queen of England. It was well known that her husband forsook her bed for that of men.  His sons were all married to beautiful women of high rank. Isabella in league with their cousin Robert of Artois set out to uncover the truth behind the rumors that all three of her brother’s wives were committing adultery and making cuckolds of her brothers. Isabella hated her sister in-laws with a passion but Robert hated them even more. Their mother was Roberts’s aunt and she had “stolen” from him the Artois estate that he felt rightly belonged to him. Destroying the three adulterous wives meant his aunts greedy downfall. Robert and Isabella would stop at nothing to bring about their destruction.

In the middle of Isabella and Roberts plot, king Philip was fighting his own battles in court. Philip's biggest battle at the moment was the destruction of the Knights Templars. The Templars grand master Jacques de Molay and many others were put on an unfair trail on trumped up charges.  They never had a chance of making it out alive. The grand master was condemned to death by burning at the stake. When the moment of his death came he used his dying breath to curse Philip for “thirteen generations” for murdering innocents. The curse left everyone uneasy and with in days the sister in-laws were on trial for adultery and the royal family was falling apart. Could the curse really be working against them? Could it be true that Philip’s actions against the innocent Templars cause the whole royal family to collapse in destruction?

5/5 Loved this one to death. It was kind of slow in parts and a bit confusing when it came to the family ties and the three sister in-laws but it all worked out in the end. I was elated when I found out this is part of a big series called the Accursed Kings Series. The Iron King is the first book in the series.


FTC ~ this novel is part of my personal collection.
Amazon: The Iron King (The Accursed Kings, Book 1) by Maurice Druon