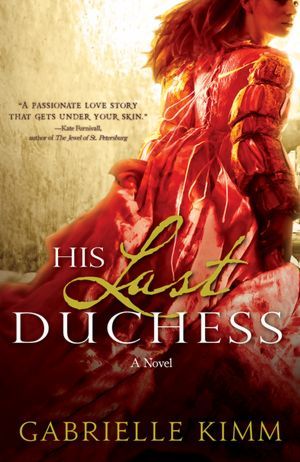 Lucrezia de’ Medici was Raised in a loving home. She was an innocent young woman awaiting her marriage to the handsome Duke of Ferrara. Having no idea what to expect in becoming the Duchess of Ferrara Lucrezia was more childlike than woman. She believed in fairy tale happy endings until she realized her handsome Duke was anything but a charming prince.

Alfonso de’ Este wanted to love Lucrezia from the moment he saw her but he was incapable of real love. He was a sadist and when it came time to go to the marriage bed he found Lucrezia’s innocence’s a roadblock to his passion. The marriage was left unconsummated and Alfonso began to despise Lucrezia for it. Since he could not control the situation in the royal bedroom he became cruel and sought to control Lucrezia by emotionally abusing her and eventually he escalated to physical abuse. Lucrezia was confused she did not understand what she did to incur her husbands wrath.  She was now afraid of him and what he could be capable of doing, her new home now became a prison under Alfonso’s watchful eye.

The marriage was under extreme strain when Alfonso decided to commission a portrait of Lucrezia. When the artists arrived Lucrezia was enthralled by their artistic skills. Fascinated by the artist’s young apprentice she discovered what it really felt like to love someone and be genuinely loved in return. It was a dangerous choice to have a liaison with anyone let alone an artist right under her cruel husbands nose. If he discovered her infidelity he would kill them both but that was a risk she was willing to take because she had to know what real love was.

4/5 Really good read, mysterious, fast paced and it kept me guessing all the way to the end. It was a real page-turner.


FTC ~ this novel is from my personal collection
Amazon: His Last Duchess by Gabrielle Kimm