Book Review: ART IN THE BLOOD by Bonnie Macbird 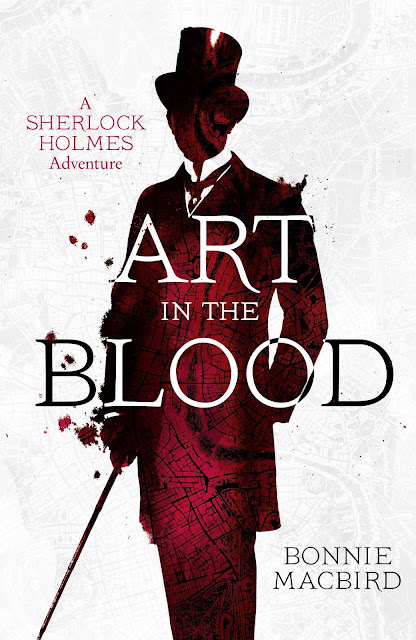 Sherlock Holmes after the famous ripper case was in the grips of depression and addiction. His faithful companion Dr. Watson had moved out of their bachelor pad and married his sweetie. Watson’s days since the ripper case had been filled with marital bliss until his old landlady had sought him out to help Holmes. Discovering Holmes sunken so low, Watson kept a vigil on his long time companion. It was then when a mysteriously encoded letter arrived from France. It was from the famous French singer Emmeline la Victoire. Holmes instantly became recharged with the mysterious plea for help from Emmaline. Worried about writing too much information in a letter she had secretly encoded a plea for help in finding her missing son.  Intrigued by the letter Holmes could not resist the opportunity to discover where the child had gone. The detective duo instantly took off to Paris to interview their new client about her son and his privileged, art-collecting father the Earl of Pellingham.

After meeting their famous client La Victoire they discussed the situation with the child. Her son Emile had been born out of wedlock and his mother at the time had been very young. The parents had made an agreement that that Emile would live with his father in England and would be raised as his heir by his step mom as his real mother. La Victoire would see him once a year at holiday time as a “family friend”. She had contacted Holmes because she went to meet her son for their yearly visit but was told he was not coming and to never contact him or the Earl again. After making a few inquires La Victoire was nearly assaulted in the streets and was told to leave the boy alone because it would mean problems for her. Scared to death she reached out to the eccentric Holmes because the Earl of Pellingham was untouchable as far as the authorities were concerned. The earl was already being watched for unproven art thefts and his illegal work practices were yet to be proven.

Leave it to the professionals, Holmes and Dr. Watson to solve this classic who done it case. They were hot on the earl’s trail, which eventually led them to Madame’s son Emille.  Trying to solve one case they ended up also on another that went hand in hand. The case of the notoriously missing statue Marseilles Nike, it was speculated the earl had a hand in illegally acquiring the Nike.  Holmes and Watson were determined to find the child and save the Nike no mater what the cost was.

3.5/5 Defiantly a different type of read for me. I enjoyed this one but I found it just did not really grab me. I think it was a great novel it just was not my style, which is the only reason I gave it a low rating. Honestly there was nothing bad about it but just not my cup of tea. It was fast paced, good characters, and had a great twist ending I did not see coming. Releasing 10.6.2015


FTC ~ this novel was sent to me by the publisher for review. I received no compensation for this honest review.