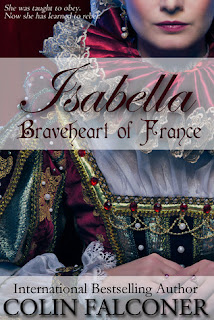 Isabella Braveheart of France by Colin Falconer
"She was taught to obey. Now she has learned to rebel. 12 year old Isabella, a French princess marries the King of England - only to discover he has a terrible secret. Ten long years later she is in utter despair - does she submit to a lifetime of solitude and a spiritual death - or seize her destiny and take the throne of England for herself? Isabella is just twelve years old when she marries Edward II of England. For the young princess it is love at first sight - but Edward has a terrible secret that threatens to tear their marriage - and England apart. Who is Piers Gaveston - and why is his presence in the king’s court about to plunge England into civil war? The young queen believes in the love songs of the troubadours and her own exalted destiny - but she finds reality very different. As she grows to a woman in the deadly maelstrom of Edward’s court, she must decide between her husband, her children, even her life - and one breath-taking gamble that will change the course of history. This is the story of Isabella, the only woman ever to invade England - and win. In the tradition of Philippa Gregory and Elizabeth Chadwick, ISABELLA is thoroughly researched and fast paced, the little known story of the one invasion the English never talk about".~Lizzie~