Book Review: THE MURDER IN THE TOWER by Jean Plaidy 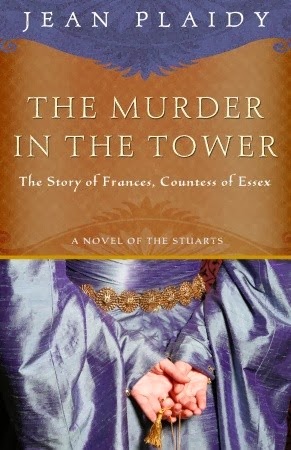 Robert Carr fell from his horse in front of King James I and became his longtime favorite from that day on. Handsome as he was he was not very bright yet James was very forgiving of his faults. With help from an old friend working as his secretary Robert became the most powerful man at court for decades. He had never really given too much thought about relationships with women until he crossed paths with Frances Howard.

Frances Howard was rotten even as a child. She was cruel to her servants and was used to getting her way. Her uncle and parents made her a child bride; she was married at court then sent back home for a while to “grow up”. Regret sank in while her husband studied abroad. She wanted to return to court and eventually she was allowed to return. Frances was the type of woman that knew she was beautiful and used it as a weapon. She would stop at nothing to get what she wanted. At that moment Frances wanted to be free. She was married to one man but that did not stop Frances from falling madly in love with the only man at court that could compete with her beauty the kings long standing favorite Robert Carr.

She set her hopes high on Robert yet he was only half warm towards her. Robert was a man that did not want conflict in his life and avoided it whenever he could. Francis wanted the one thing she should not have. She wanted to be married to Robert even though she belonged to another. To keep the man she loved and get rid of the one she did not want, Frances would go to any means to get what she wanted. She would let no one stand in the way of what she wanted but could she be capable of murder?

5/5 Plaidy, Plaidy, Plaidy we all love Plaidy. I enjoyed this novel but found so hard not to hate Frances with every fiber of my being. I feel like Robert got all tangled up in a black widows web of deceit and paid the ultimate price. I am bound and determined to finish Plaidy’s Stuart Saga and I am elated that I can finally do it. I would highly recommend this novel because Plaidy novels are always perfectly blended historical fiction novel. Plaidy just makes sense of everything historical fiction and I cannot recommend her more highly.

PG-13 Sexual reference and violence.
FTC-This novel is from my personal collection.