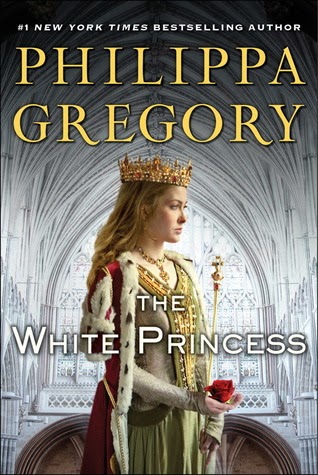 This one was not a new favorite of mine. Sadly I had really high hopes for this novel and it really fell short for me. I am a big fan of Philippa Gregory and always will be but in all honesty “The White Princess” was a real let down for me.

Elizabeth of York, daughter of Elizabeth Woodville and Edward VI was dubbed “the white princess”. Elizabeth’s life s a royal princess was a happy time but her father passed away suddenly and England fell apart at his swift departure from this life. This novel picks up right after the battle of Bosworth. King Richard III is dead and Henry VII is now King of England. Elizabeth’s mother Elizabeth Woodville and Henry’s mother Margaret Beaufort arranged the marriage to form an alliance between the house of York and Lancaster. They would join together the two houses and form the house of Tudor which would finally end the never ending “cousins war”. This is where I have to state that I did not like Philippa’s Henry Tudor. He was mean and down right unlikeable from the beginning. Margaret Beaufort had only one requirement before the wedding could proceed; Elizabeth had to prove she would be a very fertile wife. Elizabeth did not like Henry from the moment she met him and neither did I. She was still madly in love with her uncle Richard III. This was another aspect of the novel I did not like. The fact that they both had a real sexual affair irked me. Henry found this out and set himself to claim Elizabeth before they were married. He attacked her and she was not willing. He rapped her and she called him her “rapist” all through the first half of the book. However she did prove she was like her mother and she very quickly became pregnant.

After they were married the new king and queen welcomed their first child a boy name Arthur Tudor. Marriage to Henry Tudor was not at any point easy. His years of hiding and fighting his way through the war made him a very uneasy man. He suspected everyone and everything especially his own wife. He constantly accused her of conspiring with her “York” family to throw him down. She suffered many abuses by her husband but she knew her place and knew she was powerless in the Tudor court to do anything about it.

The biggest threat the Henry’s thrown came in the form of a “pretender” who claimed to be Elizabeth’s long lost younger brother Richard of York. This was a real threat and Henry recognized that if people believed this “pretender” then he could be thrown back down to where he came from. In protecting his court Henry alienates everyone especially his wife and her blood relations. Henry struggled to keep control of England and the “pretender” coming into the picture really complicated everything even more. Elizabeth found herself stuck in the very middle. She had already lost so much in her short life and wanted some peace but in a newly established Tudor Court conspiracies ran rampant and her husband always thought she had alliterative motives for the things she did. You cannot please everyone in life and Elizabeth found that out the hard way.

3/5 I enjoyed Elizabeth’s relationship with her cousin “Maggie” or how I knew her before this Margaret Pole aka the elderly woman Henry VIII executed for treason. I never imagined the two could have been so close. Now I can see that it would have made much sense. I was really disappointed with this novel. I kept reading thinking it would get better but it never really did. I really did not like that this novel had a whole different feel from the previous novels. Normally I can do a far-fetched historical fiction novel but even this one was reaching way too far. The whole book was really negative and anti climatic but that is just my two cents on this novel. .

PG-13 rating for some sexual references.
FTC-I bought this one for my personal collection.