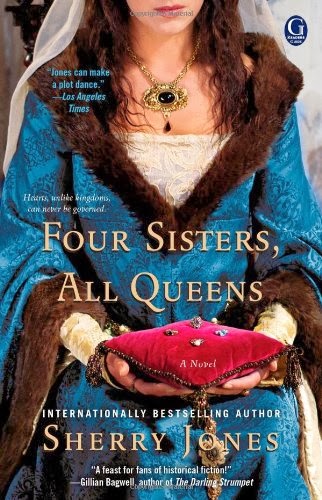 Famously beautiful the house of Savoy was renowned for their lovely qualities. Four beautiful sisters from the house of Savoy each different in their own ways snared me into their stories from the beginning of this novel. This was a delightful read that I related to so much. I also have four sisters and each one is unique just like the Savoy sisters. The tile of this novel is pretty self explanatory "Four Sister’s all Queen’s" yet I found what really mattered was how they got there.

Marguerite, the eldest of the siblings was the arrogant one yet at heart she was a hopeless romantic. Eleonore second in line was very close with her elder sister and both matched each other in ambition and wit. Sanchia was next and was born pious through and through. She loved her elder sisters but was a constant ball of anxiety that was filled with self-doubt. She was said to be the most beautiful of the girls yet it did nothing for her personality. Last but not least is Beatrice, the baby of the family. She was also a daddies little girl. Beatrice had a nasty mean streak in her but she too still loved her sisters. Growing up the girls lived in beautiful Provence. Their family lands were coveted for their rich salt mines. With four girls born to the Duke of Provence there was only one solution and that was to marry all the girls off and marry them off well.


The girls were all married off one by one as they came of age until only little Beatrice was left home. Marguerite married Louis IX of France and became Queen of France. Eleonore married Henry III of England and became England’s Queen. Then the two queen’s conspired together and married younger Sanchia to Henry III’s brother Richard of Cornwall and later King of Germany making Sanchia Queen of Germany. The three older sisters were pretty close and it really surprised me that they all spent so much time together in this novel. I can honestly say I have never read about any other Queens that traveled so much together. It made for exciting reads set in amazing locations.

Marguerite’s marriage was rocky from the beginning. Her new mother in law Blanche dubbed “the white queen” for all her white face paint held all the real power over her marriage. Blanche exerted her power over Marguerite every minute of every day. Marguerite really was queen only in name she had no real authority. Eleonore also had her own problems with her “aged” husband. Though he had a heart of gold she had no desire for him. In time she did grow to love him but her real struggles lay with the English court. They were not exactly keen to having a new foreign queen. They took every possible swipe they could at her. Yet she found security in her relationship with her husband because he truly loved her and she returned that loved whole-heartedly.

Sanchia was not really an arranged marriage yet her two older sisters defiantly played a hand in its fourth coming. The sisters needed a way to have an “in” with the Earl of Cornwall. Since Sanchia was the “fairest” of all the sisters and a devout woman they knew Richard would not be able to resist her. All Sanchia ever wanted was to enter a nunnery but her mama had always said “family” first and the family needed her to marry well. Over sensitive she was and Richard can be best descried as a pig headed man they started out good but the bad began to out weigh the good and Sanchia was very unhappy.

When the sisters sadly lost their father before Beatrice was married it became time for her to join her big sisters in the courts of the world. This was a huge turning point in the novel because when their father died Beatrice was named in his most recent will to be the now unwed Countess of Provence. He left Beatrice everything. This created some big problems because their father still had yet to pay Marguerite's dowry to France. It was this that wholly tore the sisters apart. Mama always said “family first” and Beatrice was a brat making everything very unpleasant. Beatrice chose a husband and her husband of choice was none other than the King of France’s little brother the Count of Anjou. Marguerite had a few run in’s with him through the years and he was a brat too. The new couple was so much alike, they both were bratty younger siblings and they both had a nasty mean streak.

Over the years these courageous sisters that were raised with “the hearts of boys” grew into women that possessed hearts of men. They never backed down, not during the Holy War, Civil War, or even when conquering new lands. These sisters were warrior queens of the 13th century.

5+/5 one would think that reading a novel with four protagonists would be a hard to follow read. Author Sherry Jones broke this novel down into chapters that were one person at a time and I was not in the dark every chapter because it picked right back up where it left off before. I really made use of the full family trees of all the different houses and most importantly everyone’s titles. The map also was a great resource because these sisters really went everywhere. I loved this novel it made me think of my own sisters and their unique qualities. I would highly recommend this novel to who has not heard of these dramatic sisters lives.