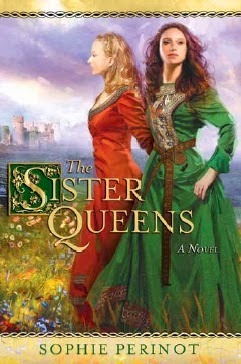 “The Sister Queens” focuses on the two elder daughters of the Count of Provence, Marguerite and Eleanor. Both sisters married very well. Marguerite married Louis IX of France and Eleanor married Henry III of England. Both sisters became queens of powerful countries. Though both women were queens they each had very different temperaments. Eleanor was the saucy one and stubborn to boot. Marguerite was the opposite she was docile and learned young to keep her feelings always guarded. Living apart the sisters did not let that stop them from keeping tabs on each other. Faithful pen pals though out their lives the adventures these sisters had were anything but dull.

The sister’s marriages could not have been more different. Eleanor’s Henry was a loving, devoted husband who always put her first. Marguerite's husband Louis on the other hand was so pious he felt guilty just for coming to her bed. They could have been happy together yet Louis’ pious ways kept them apart emotionally and physically. Marguerite strived to be a good wife and she proved her worth when they went on crusade to Egypt. The Egyptians captured both king and his nobles. Marguerite came to his rescue pregnant as she was she still was able to ransom the release of her husband and his men.

Sadly Louis never really saw Marguerite for the woman she was. He only cared about his faith and Marguerite was not a part of it. Eventually this beat Marguerite down and her eyes began to wander elsewhere. She fell madly in love with her husband’s closest friend Jean de Joinville the Seneschal of Champagne. Jean gave her what Louis never did real love, emotional, and physical. It was this relationship I enjoyed the most besides the sisters. Jean was a hopeless romantic just like Marguerite. He loved his King and Queen yet he also secretly loved the woman that was behind the Queen. She could not help her feelings yet she knew the consequences if they were caught it would her undoing.

Eleanor however was fully faithful to her “true husband” as Marguerite stated. She had the husband Marguerite never would. They were truly a happy pair. The real struggle they faced was securing Gascony for their son. After tirelessly fighting tooth and nail for it they finally had Gascony on lock down and the happy couple confirmed their new rule by paying homage to their brother in-law the King of France. The sisters were finally reunited after over a decade apart. Together these sisters now had one common goal and that was to insure lasting peace between England and France.

5/5 This novel was so different from “Four Sisters, All Queens” by Sherry Jones that I thoroughly enjoyed both novels. In this novel the sister’s personalities are swapped from Four Sisters. I enjoyed it both ways. For this one I enjoyed that Perinot explored Marguerite’s relationship with Joinville even more. It made for some super romantic moments. I highly recommend this novel because if you are not familiar with the Savoy sisters of Provence then you must make it a priority to read about these exciting sisters lives.

R-Rating for sexual content
FTC – This novel was sent to me by the author for review.
Amazon – The Sister Queens by Sophie Perinot
~Lizzie~