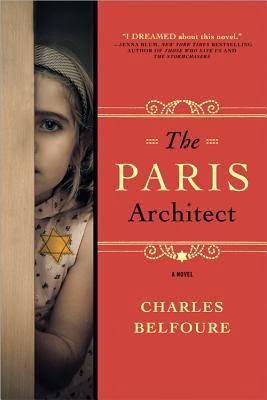 WOW…. this is an amazing novel. This one is not my normal time period. Yet I really enjoyed reading WWII novels when I was in college. This novel has a compelling story line that I just could not resist.

“The Paris Architect” set in 1942 Paris during WWII; the German’s have been occupying France for some time now violence is an every day part of life in Paris at this time. Lucien Bernard really is not the most likable person at first. He is architect struggling tot make ends meat just like everyone in this time period. He is not a man of high moral fiber. He is married yet he also has a mistress who is part of the Paris fashion elite. Lucien is the type that would never put his neck out for anyone else but in a time where murders happened daily it desensitizes a person and makes horrific uncalled for violence an everyday part of life. Lucien was barely making it and people around him were killed everyday for just trying to live.

Lucien came highly recommended for his architectural skills and when he is approached for a new job that could put his life at risk he really had to consider all his options. It was meant to be a one-time job of the up most secrecy. The job was to make a hiding space no Nazi or Gestapo could ever find. If he took the job then his new employer would make sure as an added bonus that he got a contact for building a brand new war factory for the Reich. Lucien had much to gain by drawing up one blue print for this ultra exclusive hiding spot. On the other hand he could loose not just his life, he could be tortured to death by the Gestapo. It was more than a huge risk to help anyone Jewish because anyone who was caught hiding a Jew or helping a Jew was killed right along with the Jew on the spot. Lucien deiced he would take the job because getting one over one the despicable Nazi’s was just something he could not pass up.

Lucien and his new employer did not anticipate that they would have to move more than once, which meant more than one hiding spot. The Gestapo aka Nazi secret police were closing in and if caught everyone would die. They had to stay one step ahead of the Nazi’s. Lucien at this point became fully invested in hiding some of the Jews and feared greatly the Gestapo were following him. Even with the looming threat he knew he could never just walk away at this point. His heart had changed and now he would do anything to help save people that were being wrongfully persecuted.

5/5 WOW again wow this novel is a quick paced mysterious read. You really have no idea what might happen next. I really enjoyed this one. However I do have to mention that if you are not up for blood or violence then this is not the book for you because there are gruesome torture scenes that are very detailed. I would highly recommend this novel to WWII lovers because it is a unique novel that pulls all your heart strings.

R-Rating for blood, gore, violence and sex
FTC- this novel was sent to me by the publisher for review.