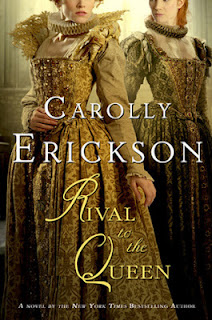 Rival to the Queen, Carolly Erickson

"From the New York Times bestselling author of The Last Wife of Henry VIII comes a novel about the bitter rivalry between Queen Elizabeth I and her fascinating cousin, Lettice Knollys, for the love of one extraordinary man.

Powerful, dramatic and full of the rich history that has made Carolly Erickson’s novels perennial bestsellers, this is the story of the only woman to ever stand up to the Virgin Queen— her own cousin, Lettie Knollys. Far more attractive than the queen, Lettie soon won the attention of the handsome and ambitious Robert Dudley, Earl of Leicester, a man so enamored of the queen and determined to share her throne that it was rumored he had murdered his own wife in order to become her royal consort. The enigmatic Elizabeth allowed Dudley into her heart, and relied on his devoted service, but shied away from the personal and political risks of marriage.

When Elizabeth discovered that he had married her cousin Lettie in secret, Lettie would pay a terrible price, fighting to keep her husband’s love and ultimately losing her beloved son, the Earl of Essex, to the queen’s headsman.

This is the unforgettable story of two women related by blood, yet destined to clash over one of Tudor England’s most charismatic men".

The Shadow of the Lynx, Victoria holt

"Nora Tamsin was fascinated by the ruthless Charles Herrick, but she discovered that he deserved his name "The Lynx". His love for her was overwhelming and frightening. By the time she realized that his plan for her was part of his obsessive desire for revenge, it seemed too late to escape.

Seduced by the power of the strange man called Lynx, Nora soon finds herself very much in love with him. And with his son . . ."~Lizzie~