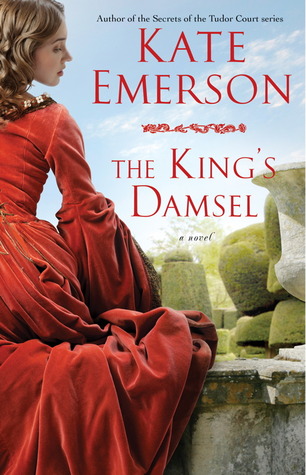 “The King’s Damsel” makes reading about the pious princess Mary Tudor a real treat. Normally I am not too fond of the disowned princess Mary but I think this novel really changed my prospective of Mary. I love that Kate always manages to out does herself because she took a very hard to love historical figure and showed just how innocent she really was in her parents fighting. This novel just made me see how young she was and especially brought to light that Anne Boleyn could be so cruel to even to an innocent child. Mary’s only fault in life was the travesty of who her mother was.

Thomasine Lodge rapidly became a very wealthy heiress when her brother and father passed away suddenly. With the men in her life gone Thomasine was left with her stepmother and a substantially large inheritance. Her official “ward ship” was bought by a man she had never met…Sir Lionel Daggett. Sold by the only person who had the right to, the King had sold her one year before she had reached her majority. There was nothing Thomasine or her stepmother could do the deed was done and worse by the king. Sir Lionel had made arrangements for her to be placed in the Princess Mary Tudor’s household as a lady in waiting. Nasty Sir Lionel had more sinister plans for Thomasine and he needed her to try and help him advance at court.

When Thomasine’s arrived at princess Mary’s household she at first struggled with her new position as a lady in waiting. But after a time she developed a true bond with the Princess. They shared a deep real friendship that even Anne Boleyn could not even break.

It was out of love for the Princess Mary that Thomasine made the drastic choice of going to Anne Boleyn’s household as a spy for the Princess Mary. The plan worked and with the help of the very handsome silk merchant’s son Thomasine was able to warn the princess of the events that were unfolding between her parents and Anne Boleyn. Thomasine’s loyalty never waivered from princess Mary because she was a true friend and always would be. Anne Boleyn really tried to trip her up at later times but it did not work. Thomasine managed to catch the eye of the King and Henry always got what her wanted especially when it came to women.

Thomasine became King Henry’s mistress to help further Mary’s plight but she also incurred the famous wrath of that witch Anne Boleyn. The walls began to close in on Thomasine and she set out to do what she should have done a long time ago. It was time to get her inheritance. She needed help to do it and had no one to turn to but where there is a will there is a way and it was Thomasine’s destiny to fight this battle against anyone who stood in her way.

5/5 I enjoyed this one so much more that some of the other novels in this series. I really enjoyed that this time around Kate’s main character is a made up one that is surrounded by real historical characters. Typically Kate dose not do that but I enjoy that she chose to do something different this time around, it really work out good for the reader.
~Lizzie~