Book Review: LADY OF THE RIVERS by Philippa Gregory 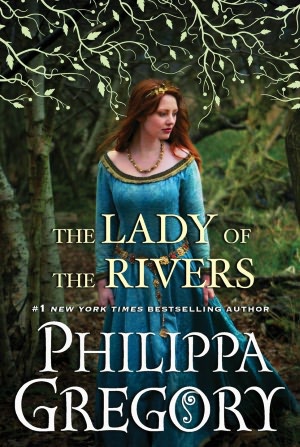 Book number three in the cousin’s war series “The Lady of the Rivers” is mother to “The White Queen”. PG has completely made up for the previous novel in the series “The Red Queen”. To be fair though I have to give her some credit for writing a novel about Margaret Beaufort because she is not exactly as likeable character during the war of the roses. The lady of the rivers is now a new favorite of mine but I am beginning to think none of her novels will ever topple “The Queen’s Fool” from its high-ranking pedestal because it is after all my favorite novel of hers. But on the other hand I am waiting for the next book in the series to arrive “The Kingmaker’s Daughter” to arrive in the mail. Who knows what Gregory has up her sleeve for the future of this series. I will continue to enjoy the benefits of her hard work cousins’ series or not.

Jacquetta, the Duchess of Bedford was a figurehead in the war of the Roses. Her daughter Elizabeth Woodville would become King Edward IV’s queen and we all know how quickly fortunes wheel turned on Elizabeth but what about her mother? In a war between cousins’ that spanned generations. Jacquetta was at the center from the very beginning. Married at what we today would deem a young age Jacquetta married the very much older uncle to the king of England. The Duke of Bedford was the English regent in France. To the powerful Duke Jacquetta was a tool that he planned on using for his benefit. It had been said that since her family had originated from the line of the water goddess Melusina. The women of the family were especially gifted when it came to the gift of sight. The Duke would awaken the sight with in Jacquetta and also introduce her to the dashing Sir Richard Woodville. Richard was the Dukes right hand man. The duke knew he was not long for this life and when he passed. Jacquetta and Richard married in secret. It was a true love match and the newlyweds went back to England to face the possible wrath of the young King Henry VI. They made it through and even found favor with the young king and when it came time for him to marry it was Jacquetta he called upon to befriend her distant relation and future Queen Margaret of Anjou.

Jacquetta became very close with the bratty queen Margaret and with her constantly stirring up problems with the nobles it was no wonder Jacquetta could feel the tension mounting to something horrific. She finds herself worrying about what the future holds because the constant shifting of power never stops. I have to admit that Philippa Gregory has given the greatest spin EVER on why and how King Henry VI because so suddenly ill. Gregory really blew me away this time and it made for excellent reading.

With an ailing King and a vengeful foreign-born Queen, England was in trouble and depending on your point of view Richard Duke of York was either a troublemaker or had legitimate issues with the king and queen but mostly it was the queen. The rift between the two house of Lancaster and York more volatile than it had ever been in the history of England. Jaquetta and Richard would defend their king and queen to the very end if need be. The couple had found that Margaret was leading them down a dark path of revenge. She would stay true to her allegiance but if Margaret kept on behaving like a spoilt brat the future of Jacquetta’s children could be put into jeopardy. She could never let that happen. Choices would have to be made and when it came time for sacrifices her family is what mattered the most.

5/5 I loved this novel. It is by far my favorite in the series. Once again I will say of course it is not 100% accurate nothing PG writes is. But I guess that is why they call it historical fiction and not non-fiction. Nonetheless I loved this read and I cannot wait for “The Kingmaker’s Daughter” to show up in the mail. I cannot wait to dig into that one and see what the future holds for Jacquetta and Richard. This is a historical fiction must read if you are not a stickler for complete historical accuracy.