Giveaway: AN AFFAIR WITH MR. KENNEDY by Jillian Stone 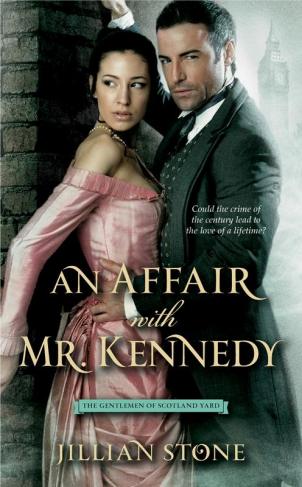 "Detective Zeno “Zak” Kennedy is considered a hero in London after breaking up a plot against the Crown. But villainy never sleeps, and he’s now after a ring of Irish anarchists plotting a bombing campaign. When he discovers that one of these treacherous lords is acquainted with his new tenant, widowed Cassie St. Cloud, he sets out to get closer to the lady. Cassie is no Victorian prude; the daughter of two prominent doctors, she is a freethinking artist and a volunteer at a girls’ school. She’s set her sights on her handsome new landlord, and soon they’re enmeshed in the most passionate affair of her life. But when she discovers that their meeting was not purely accidental, will she be able to forgive him"?

The Giveaway
Giveaway ends November 4, 2011 at midnight west coast time. The giveaway is for one unfinished advanced readers copy and open to US Only.
For 1 entry enter your name and email
For 2 entries be a follower and say so in the form
For 3 entries share this and add a real link to where you shared it.


Amazon
An Affair with Mr. Kennedy