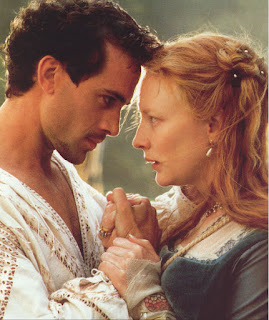 Sept 4th 1588 Robert Dudley left this life for the after life. Anyone who knows me knows that Robert is by far one of my favorite historical people besides Charles II. Why you ask? He was romantic and a bad boy all rolled into one. He loved his Queen Elizabeth I like no one else could and he even suffered with her before she was queen when no one else could help them. Their story is so tragic and maybe in another life they would have been together the way fate wanted them to be. Alas what is meant to be is meant to be and Elizabeth was meant to be not just any queen but Glorianna herself. When Robert died Elizabeth was not with him. She was devastated when she received his last letter to her. She did not come out of her room for days.

Dudley always "remained at the centre of [Elizabeth's] emotional life", as historian Susan Doran has described the situation. He died shortly after the Spain's Armada was defeated, and after Elizabeth's own death, a note from him was found among her most personal belongings, marked "his last letter" in her handwriting.

This video I found on YouTube of a British TV Series that I think aired some years back. Either way this really reminds me of Robert and what today we would call his "swagger". Here is the shows info BBC The Virgin Queen


Amazon
A Favorite of the Queen: The Story of Lord Robert Dudley and Elizabeth I (A Novel of the Tudors)

The Uncrowned Kings of England: The Black History of the Dudleys and the Tudor Throne

The Queen's Bastard: A Novel of Elizabeth I and Arthur Dudley