THREE MAIDS FOR A CROWN Author Ella March Chase: IN THE SHADOW OF THE AXE THE SISTERS OF LADY JANE GREY 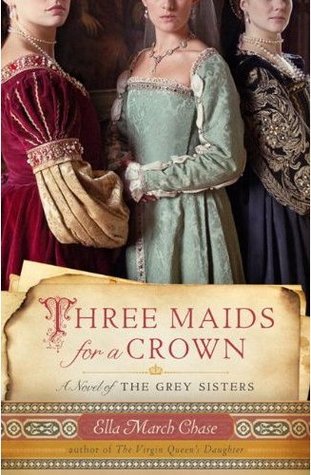 "In the second novel from Ella March Chase, we meet sixteen-year-old Jane Grey, a quiet and obedient young lady destined to become the shortest reigning English monarch. Her beautiful middle sister Katherine Grey charms all the right people—until loyalties shift. And finally Lady Mary Grey, a dwarf with a twisted spine whose goal is simply to protect people she loves—but at a terrible cost.

IN THE SHADOW OF THE AXE:
THE SISTERS OF LADY JANE GREY by Ella March Chase
“Lady Jane Grey had sisters and one of them was a dwarf!” I don’t even think I bothered to say ‘hello’ when I called my critique partner, Susan Carroll, with the news. Susan is used to calls like this. We still laugh over the story of the time I called her at midnight to tell her that when Charles II was a boy he took a stick of wood to bed with him like a binkie. If researching is a forest, I’m the kid that’s always wandering off of the path chasing a pretty butterfly (or a grisly one, in some cases. It is Tudor England!)

In my defense, I was ‘on task’ when I discovered my beloved Grey sisters. While researching Queen Elizabeth’s ladies for my first historical novel, The Virgin Queen’s Daughter, I stumbled across the delicious historical tidbit that Katherine and Mary Grey served as Queen Elizabeth’s Maids of Honor. Even more interesting: Elizabeth hated them-- understandable since the Greys tried to knock Elizabeth and Queen Mary out of the succession. But the Grey sisters had even more drama to offer: In the years prior to Elizabeth mounting the throne, Katherine and Mary Grey waited on ‘Bloody Mary’. The whole time Lady Jane was imprisoned in the Tower of London, all through Jane’s trial and after she was condemned Lady Katherine Grey was serving as a Lady of the Bedchamber, attending to Queen Mary’s most intimate needs. As England’s outrage over the queen’s proposed marriage to Philip of Spain grew, Katherine would have witnessed the unrest. She was attending Queen Mary during the Wyatt rebellion and could hear the cannon fire of the rebel army across the Thames in Southwark. Queen Mary’s household knew the Grey sisters’ father was involved in the plot. Imagine what it would have been like to be trapped behind palace walls at the mercy of the Queen your father is determined to overthrow.
Once the rebels were defeated Katherine and Mary had to know that monarchs could not afford to be merciful when it came to threats to the crown. Look what happened to the de la Poles and the Plantagenet princes in the tower. Katherine and Mary Grey must have expected they would share Jane’s fate. I couldn’t stop wondering: What would it have been like to wait upon the woman who had your innocent, sixteen year old sister beheaded? What would it have been like to live under the stigma of a father who died a traitor? How did their experiences mold them? All three Grey sisters showed courage when it counted most. All three took hold of the reins of their own destinies in the end—even the ill-fated Jane.
What I discovered about these three sisters captured my imagination and my heart. The question I hear most often since the release of Three Maids for a Crown is why do we hear so little about Katherine Grey and almost nothing at all about ‘Crouchback Mary’? My guess is that Jane’s story is so tragic writers can’t resist focusing on it: a studious girl used by ambitious parents then left to suffer the consequences of their treachery. Her execution seems like such a natural ending for a book. Yet that only gives us one perspective. I wanted to explore what living through such traumatic events might have been like for all three sisters, how circumstances beyond their control affected their relationships and future decisions. Jane was a brilliant scholar, serious and religious. Katherine Grey charmed everyone she met. A noted beauty, she was frustrated by the fact that her devout sister shunned court pleasures. During Elizabeth Tudor’s reign many foreign powers believed Katherine Grey had a better claim to the crown than Anne Boleyn’s bastard. (Henry VIII himself had declared both his daughters illegitimate). In her time at court Katherine would risk everything for love and commit a sin so grave Elizabeth would never forgive her for it. Commit that sin not once, but twice.
Lady Mary Grey, the all but forgotten sister, intrigued me most of all. What must it have been like to be of royal blood, yet an outcast because of her deformity? How did Mary feel about living in the households of her royal Tudor cousins? Considering what befell her sisters, how did Mary Grey ever have the courage to seize a love story of her own?

Perhaps it was fate that led me to these three women from another time when I needed them most. In a time of great personal upheaval—both dark and bright-- their courage and determination to stay true to their own inner compass inspired me, encouraged me. The lessons they taught: To grasp every drop of happiness that you can and never take love for granted. Especially the love of your siblings. They are your first friends, your first rivals. They know your faults, share your history, know you in ways no one else ever can. In the best of times and the worst of times that love is one of the forces that will carry you through storms to the other side.
~~~~~~~~~~~~~~~~~~~~~~~~~~~~~~~~~~~~~~~~~~~~~~~~~~~~~~~~~~~~~~~
For more on Ella March Chase check out her website.

Thank you Ella for the lovely guest post on the three Grey sisters. I encourage Tudor lovers out there to check out this amazing novel and explore a new prospective on the Tudor court of England.
Amazon