Book Review: THE TUDOR THRONE by Brandy Purdy and Giveaway 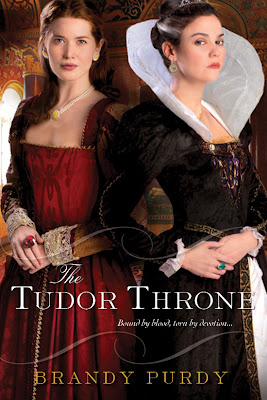 It was raunchy, sexy, and downright wild in all the right places, man I love the Tudors. Brandy Purdy really is coming in to her groove with The Tudor Throne here. Some readers however might not be able to overlook things like complete historical accuracy. If complete historical accuracy is a must in your readings then Brandy Purdy is just not the author for you. Purdy’s novels fall for me into this new type of genre being thrown around in the book world called “historical entertainment”. I feel that in that area of historical fiction authors take more liberties with the actual historical events. A prime very popular example is Carolly Erickson which I enjoyed her novels also. Brandy does take liberties yet I still felt I was left with a feeling that the novel was well written, and since I have read every spin on the Tudors I could ever shake a stick at, I admit I like a wild off the wall pure fun read every once in a while.

In the Tudor throne the novel is split between the two fractions. One part of the novel is Elizabeth I and the other Elizabeth’s oldest half sister Mary I. In the beginning of the novel readers follow sweet Mary as she goes from the doted on princess “marigold” of the Tudor court to the banished bastard of the unwanted wife Catherine of Aragon. Mary became a sad soul and one shining light in her life became her baby sister. Their relationship had its ups and its downs and even as Mary later regained the Tudor throne for catholic fraction she still failed to gain the people of England’s love. She always was so bleak even in the few glory moments she had because next to the future Elizabeth I, Mary would always be as dull as an old penny next to a shining dime like Elizabeth.

Elizabeth also loved her older sister even though she suffered real hardship for her ties to Mary. Mary did love her but that does not mean that she trusted her completely. They were of course of two different faiths Elizabeth the church of England and Mary a diehard Catholic. It was the same turmoil with her younger brother Edward and when Edward became king Mary had many problems with the path her brother chose. It drove a wedge between the siblings and when Henry VIII died it would cause problems for the years to come. Elizabeth was sent to live with her father’s last wife Catherine Parr after his passing. Catherine was beautiful, educated and still so young that she surprised her step daughter with a fly by night marriage to Thomas Seymour. Naughty Thomas Seymour would touch Elizabeth like no other and one of the biggest dangers of being around the Tudors is keeping your head even if the other Tudor was your own sister.

⅘ I think Brandy really impressed me this time around. I was extremely entertained with this novel but did not find it line crossing or to outlandish. I enjoyed “The Boleyn Wife” with its creepy Anne Boleyn ghost but I feel The Tudor Throne is done in a much better form. I have a feeling that Brandy’s next novel is going to be even better. I feel that this one was a bit wilder but...it still had the perfect mix of lust and history that was still very somewhat believable. I would love to recommend this novel to readers who have enjoyed authors like Carolly Erickson previously because if complete historical accuracy is a must then Prudy is be a no fly zone for you.

The Giveaway
The giveaway is for one finished paperback copy. Giveaway ends September 11th 2011 at midnight west coast time. The giveaway is for one autographed copy and open to US Only
For 1 entry enter your name and email
For 2 entries be a follower and say so in the form
For 3 entries share this and add a real link to where you shared it.

The Confession of Piers Gaveston

Vengeance Is Mine: A Novel of Anne Boleyn, Katherine Howard, and Lady Rochford--the woman who helped destroy them both.