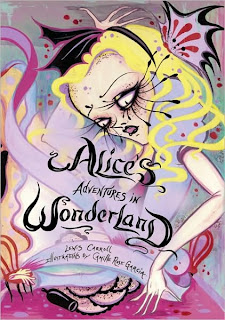 I did it; I finally nailed down a classic this year. I tend to struggle on some of the older classics and this one was no different for me. At 160 pages it might as well have been double. I found myself rereading pages at a time. Why I am not really sure but I think it was because I was trying to make sense of the nonsense style of writing or at least justify it. A struggle as it was, it was well worth the read because now I know the real story of Alice.

Alice the curious little girl actually fell down a well not a rabbit hole. Of course she was chasing the white rabbit in the waistcoat. The world she fell into was a wonderland of non-sense. I found no mention of the twin boys that have graced many of the other tales and movies about wonderland which I was sort of disappointed about. I did find one part that has largely been omitted from recent works. It was when Alice made her way to the Duchesses house. A frog in a uniform, which was an oddity to Alice in its self, guarded the home but she ventured further and found upon entry into the Duchesses house it was filled to the brim with pepper. The cook of the house was randomly throwing pots and pans at everything and everyone. Curiously the Duchess sat in the middle of the violent cook and the cloud of pepper nursing a baby that she thrust to Alice to care for. Funny part was when Alice gazed at the baby at first she could not decided if it was a human baby or a pig. She abruptly decided it was a pig and let it run off into the woods while she continued on her adventure.

3/5 Good to know but it made no sense at all but what else was there to expect? I did not expect it to make sense. It was worth the effort and the illustrations were lovely to gaze upon. Masterpieces in themselves I was aw stuck by how well Garcia captured the non-sense in a truly modern gothic fashion. A must have for any art enthusiast library. I do hope that since the movie has created so much hype about Alice that this version can draw a whole new generation of lovers of the classic Alice in Wonderland. I wish I had read this in a group that could discuss the underlining in this book. I just know that there is so much more to it than what I got out of it. 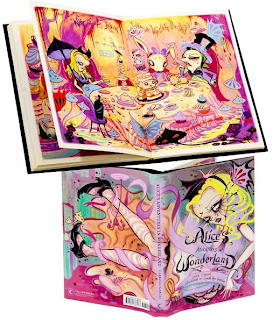 From the Web on Alice

"In the eighth chapter, three cards are painting the roses on a rose tree red, because they had accidentally planted a white-rose tree that the Queen of Hearts hates. Red roses symbolized the English House of Lancaster, while white roses were the symbol for their rival House of York. Therefore, this scene may contain a hidden allusion to the Wars of the Roses".