How They Croaked by Georgia Bragg
"Over the course of history men and women have lived and died. In fact, getting sick and dying can be a big, ugly mess-especially before the modern medical care that we all enjoy today. How They Croaked relays all the gory details of how nineteen world figures gave up the ghost. For example:

It is believed that Henry VIII's remains exploded within his coffin while lying in state.
Doctors "treated" George Washington by draining almost 80 ounces of blood before he finally kicked the bucket.
Right before Beethoven wrote his last notes, doctors drilled a hole in his stomach without any pain medication.
Readers will be interested well past the final curtain, and feel lucky to live in a world with painkillers, X-rays, soap, and 911". 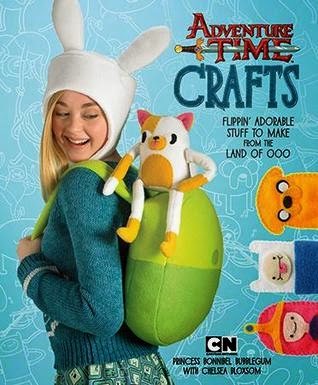 Fans of Cartoon Network's #1 show are gonna go nuts for these DIY projects featuring the strange, yet lovable characters of Adventure Time as you've never seen them before-stitched, stuffed, bedazzled, and even crocheted. For the first time, this licensed book brings together 20 projects to make at home, including Finn's iconic hat as well as jewelry, toys, home decor, costumes, and accessories. The projects are beginner-friendly, with a few challenges thrown in, and the book is chock-full of favorite characters and inside jokes from the show that fans will love. Algebraic"!
~Lizzie~