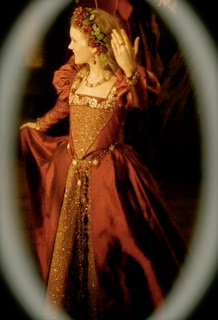 Lady Karola and the Christmas Stranger by Robin Maxwell

Lady Karola Kent was possessed of a foul mood and a growling belly as she stole ghostlike through the icy basement halls of Greenwich Palace. She was tired of being always hungry, her lady mother the Master Elf of Deprivation. “What man will take a fat cow for a wife? I’ll tell you. A poor one. And you, my girl, are bait for a high duke. Don’t you dare put that in your mouth.”

Of course the dancing at Elizabeth’s court to celebrate Christmas Eve earlier that night had been delightful, but it was the feast table that had surpassed Karola’s wildest imaginings. The peacock cooked and re- dressed all in all its feathers, dozens of mince pies, head cheese with mustard, a great pile of oranges, melons and apricots, stuffed boars’  heads at each end of the table, marchpane  gilded with gold leaf, gingerbread, sugar-plated walnuts, pitchers of hot mulled wine and syllabub...and puddings of every sort – plum  with hard sauce was her favorite – had swum before her eyes in a phantasm of color and  aroma to enrapture the soul. She’d felt her  mouth watering and though horrified, had had  to bring three fingers to her carefully painted lips to hide the smile.

Once the queen had taken the first bite and waved her white, famously long-fingered hands at the festooned lords and ladies of her Christmas table Karola had reached for a thick bit of roasted duck - the dark meat of the thigh and crisped skin of its tender groin dripping with savory oils - when she felt a stinging rap at her wrist.

“Mother, I am eating the duck.” Karola was used to the nagging and regularly defied it. “And I will have pudding.”

But before the meat had reached Karola’s lips she’d felt so vicious a pinch at her waist that she’d jumped sideways, very nearly unseating the Duke of Kenilworth on her right. There had been no choice there after. Make a scandalous scene or nibble on a pigeon’s wing all night. And no plum pudding.

From that moment she’d refused to speak to her mother who was altogether unperturbed by the ruin of her daughter’s evening. “What excitement!” she kept exclaiming as they returned with all the other single ladies to their rooms in the Greenwich’s east wing. The duke – a grieving widower of two weeks – had shown more than a seat-mate’s interest in Lady Karola’s company. Mother hadn’t been at all concerned that the “company” was the powdered skin of her daughter’s thigh. A marriage proposal was next. Now in their chamber as her mother unloosed the stiff stomacher Karola sagged, then gasped the first full breath of the evening. It was then she felt the gnawing in her belly and heard her stomach growling loudly. 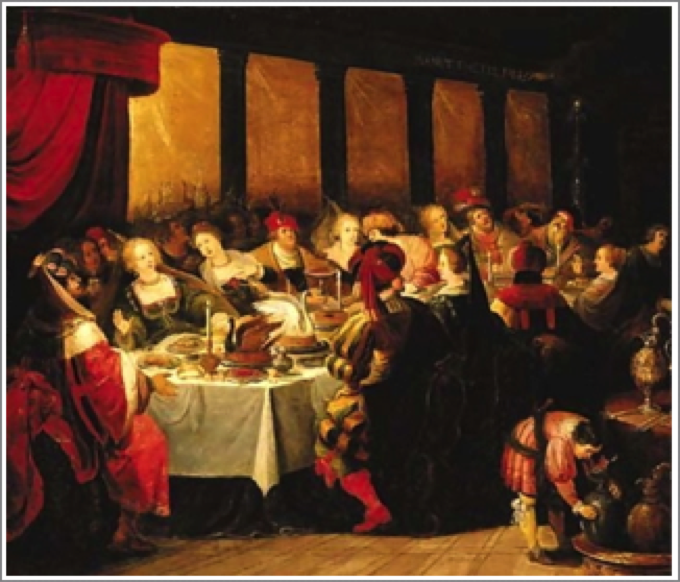 “Good,” her mother said as she pulled her daughter’s nightgown over raised arms. “Just what I like to hear.”

By three bells Karola, though lying in the canopied dark within flannel and goose down, was shivering with hunger. She’d slipped snake like from the bed shared with her mother and on bare feet – with just a thin brown wool cloak for cover – hurried from the room with no one the wiser.

The corridors were blessedly empty. They’d been housed on the third level far from the queen’s rooms, so nary a guard was prowling these halls. She boldly lifted a torch from its sconce and held it before her, striding forward as though on an important royal mission. At each stairway she made her way down a flight of stone steps, these somehow colder on the tender skin of her feet than the rock slab corridors. The kitchen never seemed so far before! She thought. At this moment Lady Karola Kent knew she would risk her title, her very maidenhead for a decent meal.

In the dark basement she saw a dim light fanning softly out a wide archway. A few low voices and bursts of laughter floated to her ear on the powdery air. Of course. The bakers. They were first in the kitchen every morning. Bread for the whole court had to be made. They would all see her.

She strode single-mindedly through the archway and nodding politely to the white- aproned bakers – women at the tables with their fists sunk into yeasty dough and men shoving huge, heavy-handled trays of round loaves into the ovens. Karola knew her way around this long, narrow kitchen. All the queen’s waiting ladies did. She walked its length past a second arched doorway to the end where stood a wooden cabinet.

She gulped at the thought of its contents - leftovers of the day. Those last most succulent morsels of the night’s meal that had not been eaten at the tables or given as alms to the poor. These were called “The Pleasure of the Queen,” but Karol knew the title was ridiculous. The stick-thin queen has pleasures, she thought but they lay not with food. They “lay” elsewhere. The plates were therefore royal leftovers that were never eaten.

A waste, thought Karola who now placed her torch in an empty sconce and opened the double doors to reveal the shelves groaning with covered dishes. The covers could not disguise the fragrances wafting up around her head, making the tiny hairs in her nose stiffen in delight. Undaunted by the many pairs of bakers’ eyes that were certainly boring into her back Karola began to lift the covers one by one. The fish terrine, the spiced aspic, the boar’s tongue. The duck.

It was there, an entire half-bird lying flat on its cut side, the plump leg bursting through its skin. There, below the leg, Karola thought, was the thigh. There was no hesitation. She reached out and pulled off the leg. She was momentarily paralyzed, contemplating the operation necessary for separating the thigh from the duck’s torso. It would be messy. Greasy. Delicious.

Karola swiveled so violently towards the archway that the leg flew from her hand. Not a moment later the blind kitchen dog was snuffling his way towards the treasure. She was afraid to look up, even though the voice was decidedly not her mother’s. It was deep and melodious and hid a laugh behind  every syllable. When she did glance  up, feigning boredom to cover her  mortification, she saw a sight that  wholly unnerved her. 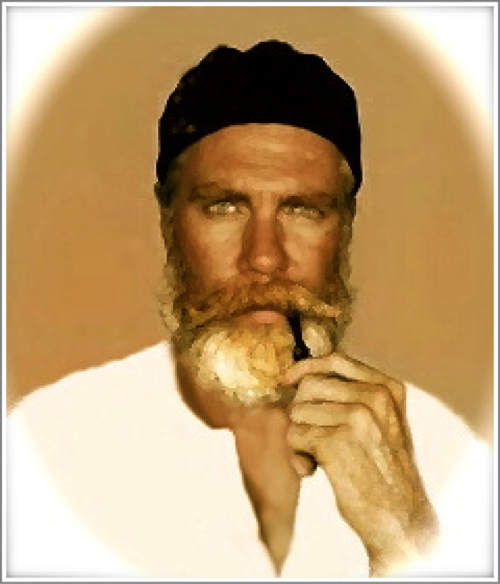 He was a Nordic man with a  rectangular face, pale wiry mustache  and a short, not-altogether-kempt  beard. An unlit pipe jutted from  between sensuous lips. He had, Karola  was sure, the bluest eyes she had ever seen, glinting with far too much light for this dim, flour-dusted kitchen. He wore an incongruous green wool jacket and breeches, all trimmed in ermine, and carried over one brawny shoulder a textile bag in a Mohammetan weave, looking too large and too heavy for a single man’s effort. It bulged in all directions with confounding angles and curves. What was in there? she wondered.

“Who are you?” she demanded instead, surprising herself again with a new found brazenness.

He didn’t answer. He simply regarded her with a steady eye. Karola opened her mouth to speak but closed it again. She had already gone too far in disgracing herself. She would wait, ladylike, for a reply.

“If I tell you my name,” he finally said in a soft growl Karola suddenly imagined she could easily come to love, “will you find me the plum pudding?”

She felt her bottom lip drop open and a little “uh” slip from her throat. She held his gaze which proved utterly disquieting. “All the plum pudding may be eaten. I haven’t found it yet.” Karola thought, but could not be sure, that she heard the green-suited man groan. She looked around her stealthily. “If I had,” she continued, “I would be eating it myself right now.”

He was giving her an order! As though he knew her. Why, this was no gentleman. He might be a new kind of fool in that suit, with the Turks bag. Yet she was compelled in a strange warm way to obey him. All he was asking for was a pudding.

Karola lifted one cover after another, coming up with delight after delight, but the man’s grunts of rejection drove her onward. On the bottom shelf was a tiny plate covered not with silver but an overturned bowl. She lifted it and her own gasp of pleasure elicited a whoop of joy from the man who was, all of a sudden, at her side.

But when they both looked down all joy fled. There was hardly a morsel left of the plum pudding. A mere dollop, though it was a drip with hard sauce.

“Here,” Karola said politely, “`tis yours. It was what you sought. What you asked for.”

Again he was silent. This was a man, she realized, who thought before he spoke, so unlike the courtly oafs she endured every day and whom – if her lady mother had her way – Karola would marry, bed and bear children for.

“I think you should eat it,” he finally said.

“If you don’t eat it, Karol replied, a rogue smile taking custody of her lips, “then you won’t be obliged to tell me your name.”

He considered that. “You wanted that plum pudding. You’ve been thinking about it all night.”

“How could you possibly know that?” she said, suddenly alarmed.

He smiled now, a slow graceful upward twirls of the lips revealing straight white teeth. “I know what is in peoples’ hearts,” he said.

She felt prickles on her arms under the brown cloak. What kind of thing was that to say? she thought.

“You’re cold,” he said simply, turning from her and the plate of plum pudding. He set his bag on the floor next to him and went rooting around in its largeness. She watched the long blonde hair swirling about his neck and shoulders and heard him muttering softly to himself, “I know you’re in there. Show yourself.”

Who on earth was he talking to? Karol thought. Was he a simpleton? A madman? Well, the bakers were still there at the other end of the kitchen.

“Ho! There you are!” she heard, and turned to see the man pulling from the sack a robe the likes of which Karola had never seen, nor ever imagined. It was woven haphazardly with strands of cloth of gold and the finest ribbons of white wool cloth and silk, even strips of cream nubby cotton like novice nuns wore. The inside, she could see now, was lined – like the trim of the green suit – in ermine.

“I think this will fit you,” he said and held it open wide.

It was a cloak fit for a queen, she thought. Well, mayhap a faerie queen. She turned her back to him and held her breath. Then a soft heaviness enveloped her shoulders and cradled her arms. She exhaled a too-emphatic sigh, but the pleasure of it was so great she was beyond caring.

Once she had repossessed herself Karol turned. She expected to find the stranger smiling delightedly down on her grateful expression. What she saw instead was the man depositing the single morsel of plum pudding between his fingers into his mouth. He held her eyes as he chewed, swallowed and sighed with unutterable contentment.