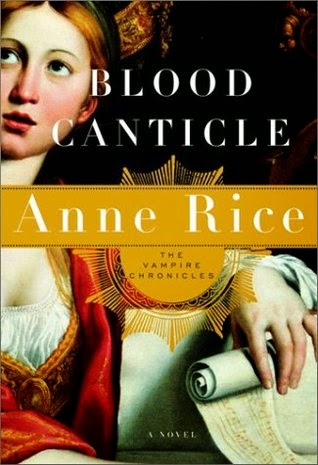 The adventures of the southern gentleman turned vampire, Quinn Blackwood and the Brat prince Lestat continue on with Blood Canticle. This time around Lestat could not help himself and he made a new vampire. Mona Mayfair has always been the love of Quinn’s life yet she was dying. The only way to save Mona was to give her the dark gift or say goodbye to her forever, which Quinn could not bear. After Mona was given a new life the deadly trio set out to find out the truth about Mona’s mysteriously missing daughter. Mona’s daughter was a “taltos” which was an alien race that over the years had been born to only the women that were witches. Mona’s family had a dark extensive history with the taltos, which is all covered in the series The Lives of the Mayfair Witches.

Mona’s cousin Rowan was the matriarch of the family and she was also a super genius doctor. At times Rowan had a history of mental instability that all stemmed from her history with the taltos. Mona wanted answers from Rowan about her daughter but Rowan did not really have any clear answers for her, which made the trio all the more determined to find out the fate of Mona’s daughter. Coming together in this novel the Mayfair witches and the vampires contact the only ancient being that Lestat knew would know the truth. The ancient vampire helped locate the daughter and what they find is shocking to say the least.

3/5 Not my favorite, out of all the books in the Vampire Chronicles this one is by far my least favorite. That does not mean I did not enjoy reading because I did enjoy the novel. I think if I had read the whole Lives of the Mayfair Witches series first then this novel would have been much better. I also felt that since I have not read that series that if I had I would have more fully grasped everything that was going on with Mona and Rowan. I would highly recommend reading the Lives of the Mayfair Witches before reading this novel.