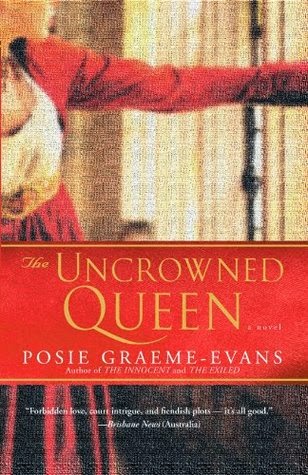 The Uncrowned Queen by Posie Graeme-Evans
"The thrilling climax to the trilogy that began with The Innocent and The Exiled brings Posie Graeme-Evans's bittersweet story of two lovers divided by the throne of England to its dramatic conclusion.
As England tears itself apart in the War of the Roses, Anne de Bohun lives far from the intrigues of cities and courts. Once King Edward IV's mistress, Anne has found safety with their son in Brugge. But now Edward himself is a hunted fugitive, and Anne's real father, King Henry VI, rules again from Westminster. Summoned by an enigmatic message from her lover, Anne is drawn once more to the passion, the excitement, and the deadly danger that Edward brings into her life. But now, the girl who was once a penniless servant has a child to protect and an inheritance to defend. Can she let her love for Edward threaten everything she has? Or will she need his help to protect her from the powerful enemy who means to destroy her?

Boasting an extraordinary heroine and intense, intersecting plots, The Uncrowned Queen is a dazzling and satisfying finale to Anne de Bohun's incredible story". 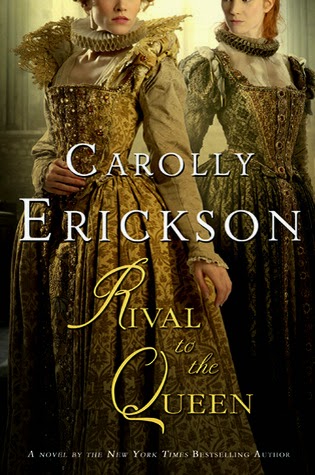 Rival to the Queen by Carolly Erickson
"From the New York Times bestselling author of The Last Wife of Henry VIII comes a novel about the bitter rivalry between Queen Elizabeth I and her fascinating cousin, Lettice Knollys, for the love of one extraordinary man.

Powerful, dramatic and full of the rich history that has made Carolly Erickson’s novels perennial bestsellers, this is the story of the only woman to ever stand up to the Virgin Queen— her own cousin, Lettie Knollys. Far more attractive than the queen, Lettie soon won the attention of the handsome and ambitious Robert Dudley, Earl of Leicester, a man so enamored of the queen and determined to share her throne that it was rumored he had murdered his own wife in order to become her royal consort. The enigmatic Elizabeth allowed Dudley into her heart, and relied on his devoted service, but shied away from the personal and political risks of marriage.

When Elizabeth discovered that he had married her cousin Lettie in secret, Lettie would pay a terrible price, fighting to keep her husband’s love and ultimately losing her beloved son, the Earl of Essex, to the queen’s headsman.

This is the unforgettable story of two women related by blood, yet destined to clash over one of Tudor England’s most charismatic men". 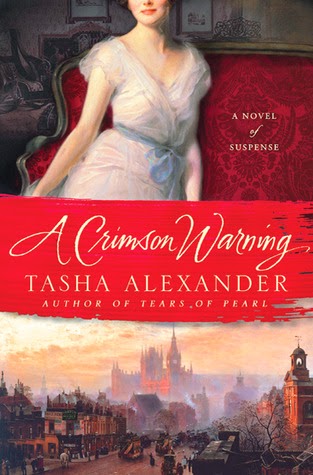 A Crimson Warning by Tasha Alexander
"Secrets prove deadly in this new novel from Tasha Alexander featuring Lady Emily Hargreaves. Some very prominent people in London are waking up to find their doorsteps smeared with red paint, the precursor to the revelation of a dark secret – and worse – by someone who enjoys destroying lives
Newly returned to her home in Mayfair, Lady Emily Hargreaves is looking forward to enjoying the delights of the season. The delights, that is, as defined by her own eccentricities—reading The Aeneid, waltzing with her dashing husband, and joining the Women’s Liberal Federation in the early stages of its campaign to win the vote for women. But an audacious vandal disturbs the peace in the capital city, splashing red paint on the neat edifices of the homes of London’s elite. This mark, impossible to hide, presages the revelation of scandalous secrets, driving the hapless victims into disgrace, despair and even death. Soon, all of London high society is living in fear of learning who will be the next target, and Lady Emily and her husband, Colin, favorite agent of the crown, must uncover the identity and reveal the motives of the twisted mind behind it all before another innocent life is lost". 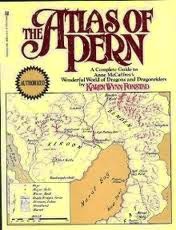 The Atlas of Pern by Karen Wynn Fonstad
"Rear cover notes: "Pern, where firebreathing dragons and their human riders join to fight the threads that threaten to destroy all life! Here's the perfect companion and guide for Anne McCaffrey's beloved stories of the Dragonriders of Pern. Karen Wynn Fonstad brings out every detail of the world and history of Pern in fascinating graphics and lucent text. Tour the land whose very existence depends on the dragons and their riders! Detailed two-color maps showing every place and feature yet discovered on Pern; Follow F'lar's research as he learns how to predict Threadfall! Charts tracking the fall of Thread, the deadly spores that periodically ravage Pern; See the hatchling grounds where Jaxom impressed the white dragon Ruth! Schematics of the great Weyrs - the homes of the telepathic dragons and their riders; Visit Ruatha Hold where F'lar found Lessa, his future weyrwoman! Plans of the Holds, where most of the people of Pern live and work; And lots more covering all the books in the great series! The Atlas of Pern provides a spellbinding tour of the world where the harassed settlers from Earth fight to ovecome seemingly impossible odds and to carve out a new life for themselves and the future."

Atlantis Illustrated by H.R. Stahel
"Stahel illustrates Atlantis exactly in the proportions that Plato described it in his dialogues, Timaeus and Critias".
~Lizzie~