Isabella d'Este Marchesa of Mantua done in watercolor pencil and colored pencil. I recently fell in love with Isabella and her sister Beatrice in one of my new favorite novels "Leonardo's Swans" by Karen Essex. Isabella was a leading lady in The Italian Renaissance. She was a avid art collector and benefactor to many of the artist that had made the Italian Renaissance. I was moved not by her deeds but by her life. Like many of the strong leading women of history I love, Isabella's life was filled with turmoil and tragedy. Considered a great beauty of her times she was also a very well educated woman that excelled in trying new things. She was also politically savvy and played a major role in the Italian Wars that had also involved her sister The Duchess of Milan. I was truly inspired by a bust that I came across on the web of Isabella. Beautiful does not even describe this bust and yet I am saddened by the history that the Nazi's had stolen it during WWII. Luckily for me and the future generations of the world The Monuments Men had a very intriguing story of how the bust was recovered. It is sad to think that the bust could have been lost forever and I never would have even seen it had they not found it. This is my ode to Isabella and the insight she had brought to the start of a art revolution that even today continues on. She is gone but will never be forgotten. 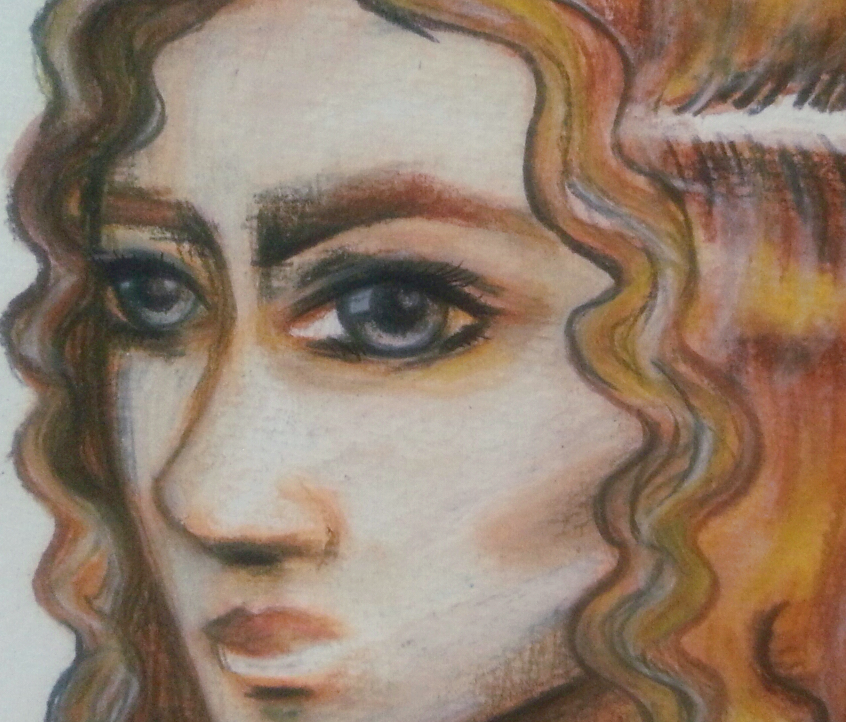 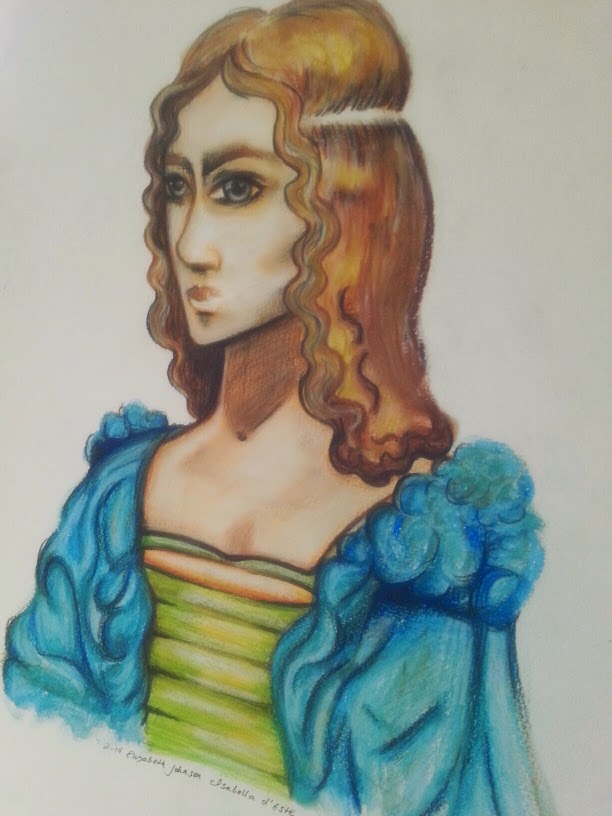 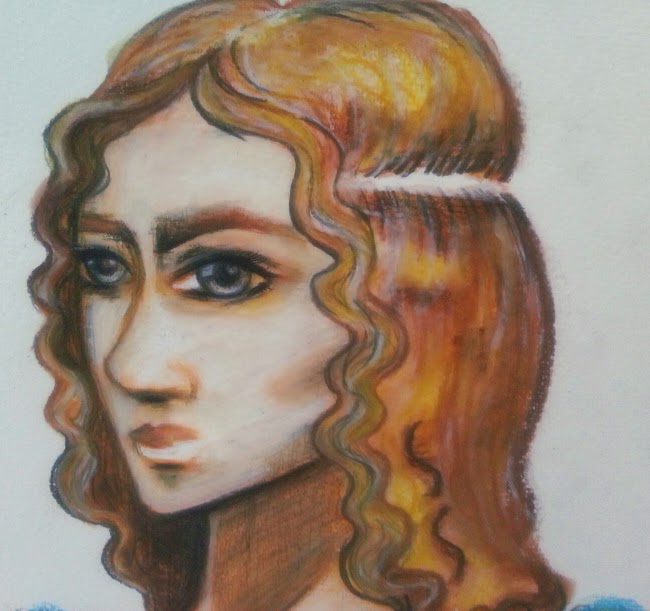 "Isabella d'Este (18 May 1474 – 13 February 1539) was Marchesa of Mantua and one of the leading women of the Italian Renaissance as a major cultural and political figure. She was a patron of the arts as well as a leader of fashion, whose innovative style of dressing was copied by women throughout Italy and at the French court. The poet Ariosto labeled her as the "liberal and magnanimous Isabella", while author Matteo Bandello described her as having been "supreme among women". Diplomat Niccolò da Correggio went even further by hailing her as "The First Lady of the world".

She served as the regent of Mantua during the absence of her husband, Francesco II Gonzaga, Marquess of Mantua and the minority of her son, Federico, Duke of Mantua. In 1500 she met King Louis XII of France in Milan on a diplomatic mission to persuade him not to send his troops against Mantua.

She was a prolific letter-writer, and maintained a lifelong correspondence with her sister-in-law Elisabetta Gonzaga. Lucrezia Borgia was another sister-in-law; she later became the mistress of Isabella's husband". -Wiki 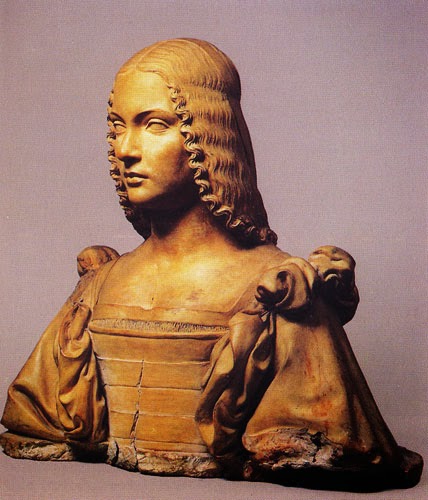 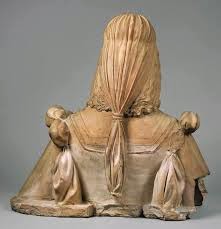 
Portrait of a Woman, Probably Isabe!a d’Este, c. 1500 T erracotta, formerly polychromed
21-3/8 x 21-1/2 in. (54.3 x 54.6 cm)
"This summer, the Monuments Men Foundation and Kimbell Art Museum in Ft. Worth, Texas announced that a Renais- sance portrait bust in the Kim- bell collection had been stolen by the Nazis during World War II and was one of thousands of works of art found in the Al- taussee Salt Mine in Austria.

This incredible discovery oc- curred in conjunction with an unrelated project. In the fall of 2009, while researching the missing albums containing photographs of the works of art destined for Adolf Hitler’s Linz
Museum, we came across a war- time photograph of the Steinberg salt mine in Altaussee, Austria. In early May 1945, during the closing days of the war, the Monuments Men were in a race against time to locate the last great Nazi repository of stolen works of art. A key tip led them to the Steinberg mine. They arrived to discover that a Nazi plot to destroy the salt mine and its priceless contents, including more than 6,000 paint- ings, had only hours before been thwarted, a harrowing story recounted in The Monuments Men: Allied Heroes, Nazi Thieves, and the Greatest
Treasure Hunt in History. 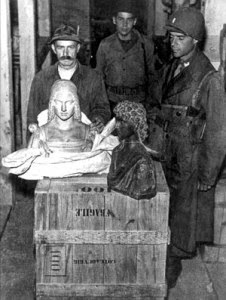 Hidden inside the mine were many of civilization’s greatest artistic mas- terpieces including Michelangelo’s Bruges Madonna, Jan van Eyck’s Ghent Altarpiece, and two Vermeer paintings (The Astronomer and The Artist’s Studio), to name just a few. Of the many photos taken inside the salt mine, we had not come across the photo above before. The photo shows the Kimbell's terra cotta bust of Renaissance art patron Isabelle d'Este being removed from the mine. We recognized the sculpture imme- diately and knew it had to be the Kimbell's version and not a copy be- cause of the vertical firing-line cracks on the sculpture's front. We were aware that the Kimbell’s provenance for the bust made no mention of be- ing in Hitler's art hideout.

When the Monuments Men discovered the cache of artwork in the Altaussee salt mine, they had to remove the art as quickly and as carefully as they could from a narrow mine shaft. The artworks were then taken to the Munich Collect- ing Point, which was housed in the former Nazi party head- quarters in Munich, as it was one of the largest buildings left standing after the war. Upon the arrival of the works of art in Munich, the Monuments Men created property index cards for each object. In researching those cards we discov- ered the “smoking gun”: Altaussee inventory card number 1246, which documented the arrival in Munich on June 28, 1945 of the terra cotta bust of Isabelle d’Este, which at the time was “attributed to Leonardo da Vinci.” The back of the inventory card revealed that the sculpture was returned to the Netherlands on June 3, 1946". -Monuments Men Foundation

For more on Isabella d'Este Check out the other good reads on her:
Light on Lucrezia by Jean Plaidy
The Duchess of Milan by Michael Ennis
~Lizzie~