Book Review: SONG OF THE NILE by Stephanie Dray 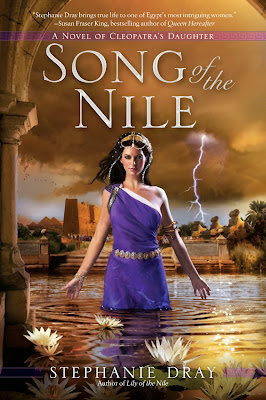 Time for round two in the Cleopatra’s Daughters series, “Song of the Nile” follows Cleopatra’s daughter Selene through her struggle to wrest Egypt away from the greedy Imperator of Rome Augustus. Selene survived being a royal captive in Rome only to be married off to the newly named King Juba of Mauretania. He once was her teacher yet he was not her choice for husband but when you live under the Imperator’s roof you automatically loose all your rights especially if you are a woman. Selene’s feelings became no longer of import. Augustus did whatever he pleased because he literally ruled the entire known world at the time. He knew he had Selene trapped, holding her little brother as a royal hostage in Rome. He had power over her and he planned on keeping it that way. With one brother a hostage and her twin Helios’s circumstances unknown, Selene constantly fretted that she would never see Helios’s again.

After Selene was married it was time to go to her new kingdom Mauretania to take her place as Queen. She would never be the same after that horrible voyage to Mauretania. The creepy Imperator Augustus would take full advantage of Selene’s venerability on this trip. The Imperator’s vicious wife Livia set up Selene. She waited for her chance to strike at Selene and the time was now before Selene made it to her new kingdom. Liva set Selene up to be attacked by Augustus and he always got what he wanted. I cried for Selene, it was awful and rape is never ever a pretty thing. I truly was heartbroken for Selene because he had taken from her the only thing that was truly hers. Eventually my heartbroken feelings were replace with anger and then it evolved into this feeling that she deserved revenge against the man who took everything she ever had and more.

Upon her arrival in Mauretania Selene was traumatized by the previous events. I think she went into a state of shock. She also took a vow to never let another man touch her again and that included her new husband Juba. Heartbroken and once again sick of the cruelties of life she gets word that her rebellious brother Helios was dead. Her heart would never let her believe it and she would have to endure the trials the Imperator would put her through. The only thing that held Selene together at this point was her ambitious need to get Egypt back. Everything was in her way on the road to get Egypt. Friends, family and even her own husband she might have to sacrifice everything she ever had for Egypt. Her heart always belonged in Egypt but making a new home in Mauretania had begun to change everything for her. She had to find her own way in this life and Caesar be damned nothing was going to stop her.

5/5 I found this novel way more dark and mysterious compared to “Lilly of the Nile”. I really enjoyed it but I wish I had read them closer together. I seemed to have forgotten a lot of the important details from the first one. This novel goes deeper with Selene’s mystical side and I found like “Lilly of the Nile” that Dray perfectly blended the right amount of historical fiction with fantasy. There really was just enough magic where it was not overwhelming. I feel I must note a couple points about this novel that might be a turn off to some readers. First Selene is rapped and it is brutally graphic and the other issue is incest. As many of you know in Egypt’s history it was common for royal siblings to marry each other. Some readers might find Selene’s relationship with Helios a little much in this novel. It did not bother me but it might bother others just like the rape. I just wanted to bring that to light so readers do not expect something else out of this novel. I would highly recommended this novel for mature historical fiction readers who are looking for a unique novel that is off the beaten historical fiction path.

FTC-this book was sent to me by the publisher.
R-Rating for sexual violence.