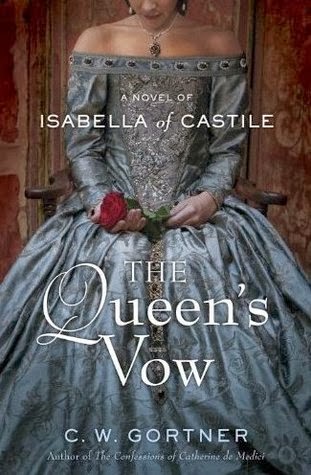 This novel was a hard one for me in the beginning. My mind just was not in it like it should be. It really was my own issues holding me back. I originally started this novel and got about twenty pages in in and ended up putting it down. I recently came back to it and read about five pages and was really hooked into it. I have always loved Gortner’s novels but this one was really different for me because I have not read any novels on Isabella of Castile. I am elated that I went back to it because it really gave an extensive background on his previous novel “The Last Queen” which is about Isabella’s daughter Jauna.

Isabella Queen of Castile known as the warrior queen. A rightly earned nickname because she fought tooth and nail for a better Castile. Her father had died when she was very young and her older half brother was named King Immediately. Her mother, brother and her instantly fled the court because it seemed to me like her mother and older half brother had some serious friction there. They lived a quiet life for years before her half brother the King called her and her little brother back to court. Court in Castile was a viper pit and both children were very weary of what their court life would entail. Isabella was keen to pick up from the get go that the court was having some serious issues. It was said that the King’s new child was not of his making because the Queen had a handsome lover at court that was possibly the real father of the little girl. The Queen did not like Isabella and she made it very clear that this was no secret in court. It was Isabella’s first court dinner that she was introduced to her handsome cousin Ferdinand of Aragon, Prince of Aragon. Her introduction to court was just the beginning of a long-standing fight for the ultimate power of ruling Castile.

It is no secret that Isabella was a strong willed individual even from the beginning. Her daughters would obviously inherit this trait from her and she did not earn the title of defender of the faith from the Pope for doing nothing. She was determined to marry her cousin Ferdinand and if her brother had his way it would never ever happen. He tried to forbid it yet he did nothing to really stop them. It really was a halfhearted effort on her brothers part. After many years of fighting with her kingly brother he passed away but before he did he had named his daughter with the queen illegitimate, and since Isabella's younger brother had passed some years before it left only Isabella as Castile’s true heir. Isabella became the sole ruler of Castile and she made her husband Ferdinand her King Consort. Immediately the pair began to make changes to everything and demanded fealty from all of Castile’s nobles. Together they revolutionized Spain and made it what it is today. They fought to take back what was rightfully theirs and they would never back down even if that meant war with the Moors. They had their sights set on taking back the city of Granada and nothing would stop them not even the dreaded Spanish Inquisition.

5+/5 Gortner always amazes me. I love his style of prose. I still am really kicking myself for putting this one down for so long but I am glad I picked it back up because I really would have missed out on a great read. One thing about this novel that I did not expect was that Gortner had hinted that Isabella’s daughter Juana had another side to her that leads up to the events that take place in “The Last Queen”. I found it a really nice add in to the novel. I would highly recommend this novel because Gortner makes you live, and breath Isabella’s life, which is a true gift in an author.

FTC-This novel was sent to me by the author.
PG-13 rating for implied sexual reference