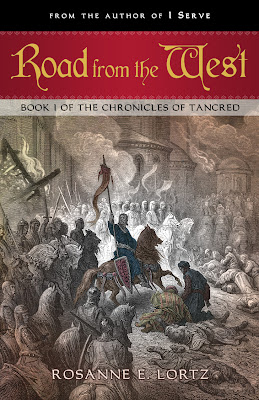 "Road from the West. Book I of The Chronicles of Tancred. Historical fiction set during the First Crusade. Available Sept. 2, 2011".

"ROAD FROM THE WEST: BOOK I of the CHRONICLES OF TANCRED

A tale of Courage, Conquest, Intrigue, and Honor

You know the Knights Templar, you know Richard the Lionheart—now learn the story that started it all in the adventures of the First Crusade.

Haunted by guilt from the past and nightmares of the future, a young Norman named Tancred takes the cross and vows to be the first to free Jerusalem from the infidels. As he journeys to the Holy Land, he braves vast deserts, mortal famine, and the ever-present ambushes of the enemy Turks—but the greatest danger of all is deciding which of the Crusader lords to trust. A mysterious seer prophesies that Tancred will find great love and great sorrow on his journey, but the latter seems intent on claiming him before he can find the first. Intrigues and passions grow as every battle brings the Crusaders one step closer to Jerusalem. Not all are destined to survive the road from the West".

"This enthralling confection of a novel, the first in a new trilogy, follows the transformation of a coddled Austrian archduchess into the reckless, powerful, beautiful queen Marie Antoinette.

Why must it be me? I wondered. When I am so clearly inadequate to my destiny?

Raised alongside her numerous brothers and sisters by the formidable empress of Austria, ten-year-old Maria Antonia knew that her idyllic existence would one day be sacrificed to her mother’s political ambitions. What she never anticipated was that the day in question would come so soon.

Before she can journey from sunlit picnics with her sisters in Vienna to the glitter, glamour, and gossip of Versailles, Antonia must change everything about herself in order to be accepted as dauphine of France and the wife of the awkward teenage boy who will one day be Louis XVI. Yet nothing can prepare her for the ingenuity and influence it will take to become queen.

"One of readers favorites, Frederica is full of surprises
When Frederica brings her younger siblings to London determined to secure a brilliant marriage for her beautiful sister, she seeks out their distant cousin the Marquis of Alverstoke. Lovely, competent, and refreshingly straightforward, Frederica makes such a strong impression that to his own amazement, the Marquis agrees to help launch them all into society.
Lord Alverstoke cant resist wanting to help her
Normally wary of his family, which includes two overbearing sisters and innumerable favor-seekers, Lord Alverstoke does his best to keep his distance. But with his enterprising - and altogether entertaining - country cousins getting into one scrape after another right on his doorstep, before he knows it the Marquis finds himself dangerously embroiled..."

In a Treacherous Court

"An unconventional woman. A deadly enemy. A clash of intrigue, deception, and desire. . . . 1525: Artist Susanna Horenbout is sent from Belgium to be Henry VIII’s personal illuminator inside the royal palace. But her new homeland greets her with an attempt on her life, and the King’s most lethal courtier, John Parker, is charged with keeping her safe. As further attacks are made, Susanna and Parker realize that she unknowingly carries the key to a bloody plot against the throne. For while Richard de la Pole amasses troops in France for a Yorkist invasion, a traitor prepares to trample the kingdom from within.Who is the mastermind? Why are men vying to kill the woman Parker protects with his life? With a motley gang of urchins, Susanna’s wits, and Parker’s fierce instincts, honed on the streets and in palace chambers, the two slash through deadly layers of deceit in a race against time. For in the court of Henry VIII, secrets are the last to die. . . .Brilliantly revealing a little-known historical figure who lived among the Tudors, Michelle Diener makes a smashing historical fiction debut.
~Lizzy~