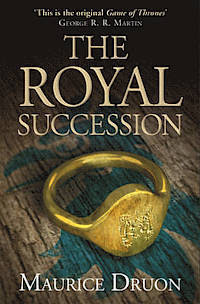 King Louis X of France is dead, poisoned by the Countess Mahaut. Louis left behind a country in complete crisis. His pregnant widow Queen Clemence of Hungary was stricken with grief. So tremendously that she was on the verge of losing the unborn child in her womb. Her unborn child was the only legitimate heir to the French throne. Sick to death Clemence lay in her bed fighting for her life and the life of her unborn child. In the midst of the battle of her life every single noble in France was vying for the positions of power in France. Mahut and her son in law Philippe of Poitiers were leading the pack in a great game of deception. Together they were a lethal pair and they would do anything to secure Mahut’s position as Countess of Artois. They plotted on how to steal the greatest prize of all the crown of France from a child that was not even born yet and might not even make it to birth.
3.5/5 I enjoyed this read but it was by far the darkest and dirtiest of the novels in the series I have read to date. The despicable murders that take place were very hard to stomach. It was hard for me to not wince while I was reading it. This is book number four in the Accursed Kings series.

R ~ Rating for violence
FTC ~ This novel is part of my personal collection. I received no compensation for this honest review.