Book Review: GIRL ON THE GOLDEN COIN by Marci Jefferson 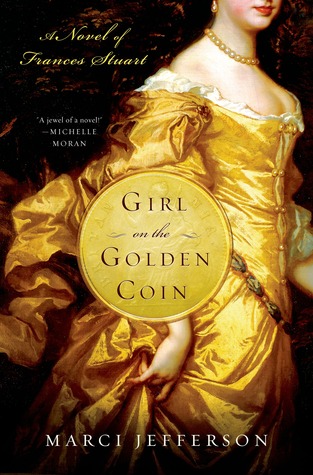 Frances Stuart lived the poor life of an exiled distant royal. Her life changed instantly when her cousin Charles II reclaimed his rightful throne and brought about the Restoration period in England. Whisked away by her cousin Madame Henrietta, Frances was brought into the French court by its leading lady. Madame was freshly married to the ruling Sun king’s secretly but not secretly gay brother Philippe.  Henrietta had her own secrets that Frances was privy to. She was in love with her married brother in law the king of France. A vicious love triangle arose and Frances found herself caught up in it when Louis turns his affections towards Frances. The sun king was no fool and Frances was a stunningly beautiful young woman but when she refuses to become his mistress Louis rains his full ire down on her and banishes her to England under his terms. Louis banished her to prove her loyalty to him by being his spy in England. She was commanded to seduce the notorious womanizer King Charles II. She had no choice, she had to go and do Louis’ bidding because she had lost her cousins love and there was nothing left for her in France.  It was time to move forward and onto England.

Though Frances was a Stuart she never knew England as home. She had always wanted to belong somewhere and growing up the poor exiled royal she was it had a tremendous impact on her childhood. Frances would need allies in the English court and she had found one in the Duke of Buckingham. Beautiful in every possible way it was inevitable that Charles would be enticed with her show of beauty and naivety. Charles took notice immediately and appointed her new luxurious rooms at Whitehall and a position in his new Queen’s household. He made sure she had everything she could ever want. With Charles’ favor came a whole new entourage of admires. Everyone that met Frances fell in love with her innocent ways except the king’s long time official mistress Lady Castlemain. She had already bore Charles a whole slew of recognized children. Lady Castlemains grip on the king was unnerving to Frances. To be successful in keeping her oath to Louis she had to devise a plan to run with her innocence charade and avoid sleeping with Charles at all costs because now she had grown close to his queen and had also promised her too she would not become his mistress. Frances and the queen had become fast friends and she promised that she would lead Charles to her bed after receiving stimulation from Francis’ bed. The queen needed to produce an heir to secure her position and Frances promised to help her.

Over time at court Frances went with the flow of the moment. At times she argued with Lady Castlemain, other times with the Duke of Buckingham. Her nights were filled with the company of her admirers but only Charles mattered to her. Things between them had progressed over time and she was his favorite darling of the court. Secretly she had always been working with Louis but Charles had that famous Stuart charm that wedged its way into her true heart. She developed deep feelings for him. But loving a king that already had slew of mistress’ to fight off and an innocent wife was too much for Frances. A moment of weakness and she found herself at a turning point in her life. Sacrificing the love of the merry monarch could have dire consequences. She could stay at court and take lady Castlemains place as official royal mistress. She could be one of many in a troupe of women that loved the merry monarch Charles II but would it be enough for Frances?

5/5 Loved it!!!! I read this one super fast because it engrossed me from the very beginning. An amazing break out novel from Marci Golden. It just makes me think wow if this is her first novel what will she write next? As you all know I love the Stuarts but never read France’s story because I wanted to save it for a really good book and The Girl on the Golden Coin was an amazing great novel. The style was like many of the heavy hitters of historical fiction and I expect and hope for many more great novels from Marci because she is defiantly now a new favorite.


FTC ~ I won this book in an online giveaway.
Amazon ~ GIRL ON THE GOLDEN COIN by Marci Jefferson