Book Review: TO DEFY A KING by Elizabeth Chadwick 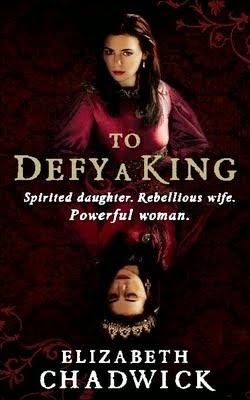 Daughter of England’s greatest knight William Marshall, Mahelt Marshall was the soft spot in her fathers heart. Only having his daughter’s best interest in mind William made the best marriage match he could possibly make for his beloved Mahelt. Hugh Bigod the heir to the Earldom of Norfolk was a handsome youth that like his father was man of high integrity. Her father had perfectly matched them on many different levels. Mahelt was a bold and stubborn while Hugh was calm and reasonable. Together they connected on a deeper level of understanding and love.

Leading up to their marriage the Marshall family had been the focus of the tyrant King Johns wrath. Mahelt’s beloved brothers had been held as royal hostages for confirmation of the marshall’s good will towards the king. The Bigod household had taken Mahelt in at a younger age than most marrying women because with King Johns eye on the marshal’s her father knew the safest place for her was as far away from john as possible. She would be safe under the Bigod family’s protection. The safety of her new family lasted for a time but King John had been on a rampage of an abuse of his power. He was a ruthless king that had turned against his loyal Bigod and Marshall supporters. John was determined to bring the Bigods and the Marshall’s to heel or crush them into submission. With John determined to destroy both of her families Mahelt was forced to defy the king and fight for her family  marriage, and their future.

4/5 Everybody needs a little Chadwick in their life because I think she is right up there with Jean Plaidy as far as historical fiction greats go. I really enjoyed this novel because I never expected Mahelt to be so feisty! This novel I would highly recommend to all historical fiction lovers because Chadwick is gifted at weaving such beautiful stories.

FTC ~ this novel is from my personal collection.
R ~ Rating for violence and sexual references.
Amazon: TO DEFY A KING by Elizabeth Chadwick