Book Review: THE MAID: A NOVEL OF JOAN OF ARC by Kimberly Cutter 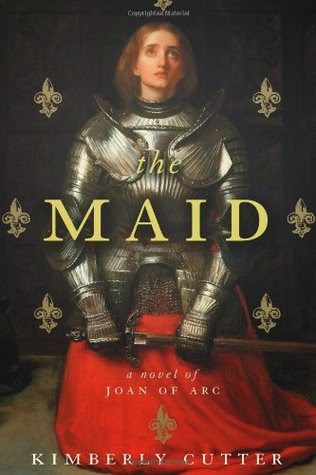 Jehanne the peasant farmer girl from Domremy France started her quest to free France from the vicious marauding English because the angels had spoken to her. They told her it was god’s will that its uncrowned King Charles VII reclaim France. Given these holy visions of what she was expected to do Jehanne willingly run away from her abusive father and an almost forced upon her marriage. There was nothing good for her at home. Ever since her sister had been brutally murdered by the English her father had heaped abuse after abuse on her pious little soul.

Where there is a will there is a way and Jehanne found a way to escape her abusive home, she taught herself how to ride a horse and eventually convinced Sir Robert to send her to the King with a letter of recommendation. Sir Robert had been a skeptic at first of her self proclaimed mission but when she had rightfully predicted a massacre of French troops he believed the Maid was truthful. By the time she had reached her uncrowned king she had inspired quiet a following and had become know through the land as the Maid come to save all of France from the evil invading English. Taken into a world she had never known her faith never wavered and her angels had spoken to her of her duty to free France. Determined to save her King and country Jehanne dressed like a boy-fighting tooth and nail right besides the troops all for France’s freedom.

Victory after victory was theirs and her fame spread like wild fire because she had inspired a new hope for the future. Masses of people had flocked to her banner for guidance from the famous Maid. Having all of France backing her Jehanne was confidante in her abilities but her indecisive King Charles was unsure of his position and was pulling back at the worst moment for Jehanne because it would led to her famous downfall.

3/5 I did enjoy this read because it was fast paced and filled with adventure. I gave it a lower rating not because I did not think it was good but because it was graphically violent. I found the details of the battles and her struggles a bit too much for my taste. I am the type of reader that cannot stomach too much graphic violence or sex and even though I enjoyed the read I found myself wincing at the gory descriptions of this brutal time period. I would recommend this novel for historically fiction lovers that can stomach the violent bits.

FTC ~ this novel is from my personal collection.


R ~ Rating for graphic violence.
Amazon: THE MAID: A NOVEL OF JOAN OF ARC by Kimberly Cutter