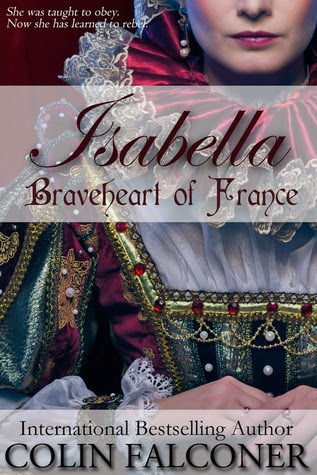 Like all royal princesses Isabella of France was married off young. Edward II King of England became her husband and she had no idea what to expect from him. Old for her years Isabella fell head over heels in love for new husband. Her love would never be returned in the way she rightly deserved. Edward had married Isabella out of necessity of getting an heir. It was speculated that Edward was gay because he did have his favorites and Piers Graveston was his “one true love”. Over the years Isabella was tolerant of this relationship but it all became a bitter pill for her to swallow everyday of her life she was always second in Edward’s affections.

Edward was eventually forced into giving up Piers on multiple occasions and the last time Piers was illegally executed. His grief for Piers was all consuming for years he paid for prayers to be said in his name daily. Hugh Despenser became a new favorite of Edwards and he was handed a wealth of power with his new position. The new favorite set out to strip Isabella of her power, wealth and dignity. This time had been especially hard for Isabella because in the years after Graveston’s death her and Edward had become closer. It hurt her deeply that Edward would let his new favorite supplant her in his affections.

Striped of all her rights Isabella was of no consequence until Edward needed her to negotiate with her brother the King of France over a land dispute. Taken from her lock down Isabella was sent to her native France and on her arrival she became determined not to ever go back to way things were with Edward in England. With the help of her loving brother and the notorious English outlaw Rodger Mortimer, they out smarted Edward and had her young son sent to her in France. Her son was to pay homage to the French King for the land in his fathers place. It would be the beginning of the end for Edward. There is nothing worse in this life than the scorn of an ill treated wife and Isabella would have her revenge because Edward would not give her the one thing she so desperately needed; his love.

4/5 Loved this one! It was short to the point and broke down into little chapters that kept up to the pace of the story line. Recommended for historical fiction lovers alike because the wrath of a powerful queen always makes great reads.

FTC-This novel was sent to me by the author for review. I received no compensation for my review.
PG-13 Sexual References