Cover Alert: "By the King's Design" by Christine Trent

Christine Trent author of By the King's Design 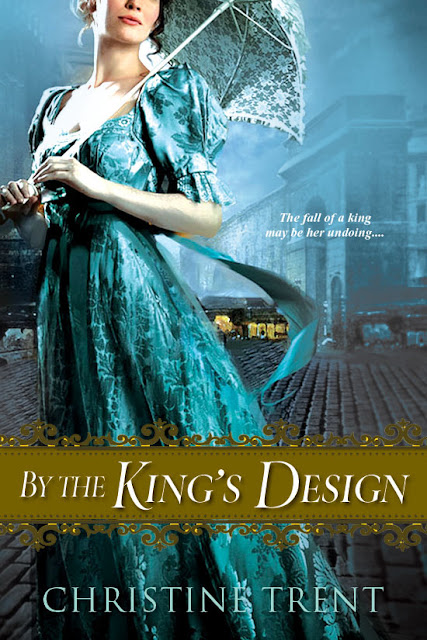 "Strong-willed Annabelle Stirling is more than capable of running the family draper shop after the untimely death of her parents. Under her father's tutelage, she became a talented cloth merchant, while her brother Wesley, the true heir, was busy philandering about Yorkshire. Knowing she must change with the times to survive, Belle installs new machinery that finishes twice the fabric in half the time it takes by hand. But not everyone is so enthusiastic.
Soon, riled up by Belle's competitors, the outmoded workers seek violent revenge. Her shop destroyed, Belle travels to London to seek redress from Parliament. While there, the Prince Regent, future King George IV, commissions her to provide fabrics for his Royal Pavilion. As Belle's renown spreads, she meets handsome cabinetmaker Putnam Boyce, but worries that marriage will mean sacrificing her now flourishing shop. And after Wesley plots to kidnap the newly-crowned King-whose indiscretions are surfacing-she finds herself entangled in a duplicitous world of shifting allegiances.

Painting a vivid portrait of life in the British Regency, Christine Trent spins a harrowing tale of ambition, vengeance, love, and complex loyalties against the dynamic backdrop of the early Industrial Revolution".

By the King's Design