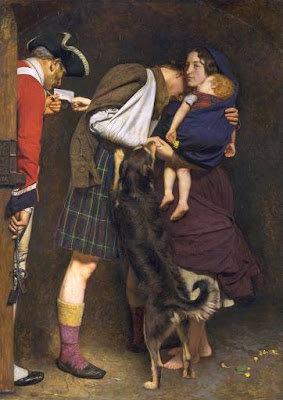 Painted by Sir John Everett Millais (1829-1896), one of the only paintings in history that actually needed its own personal body guards to shield it from the adoring fans.

I am profoundly moved by this painting it has struck something so deep inside me that I can feel the emotion represented. One would think that after receiving the order for release from prison a family reunion would be a happy moment. The symbolism is distressing to me because I am a mother but before I was a mother I was a wife. I love my husband so deeply with every fiber of my being that the emotion portrayed in her expression tears at a part of my soul.

"The picture tells of a Scottish Highlander's release from prison during one of the many wars waged between the Highlanders and the English army. The determined, resigned facial expression of his wife suggests that his order of release was obtained at the expense of her honor; the husband humiliated, defeated stance suggest he knows the sacrifice she made. The model for the soldier's wife was Scottish Effie Ruskin; later to become Effie Millais. It was during the painting of this picture that she and Millais fell in love and she confided to him the travesty of her marriage to Ruskin".
Essential Pre-Raphaelites

"The subject is simply that of a wife, with child in her arms, coming with an order of release for her husband, who has been taken in the Civil Wars. The husband, overcome with emotions, and weak from a recent wound (his arm is in a sling), can but fall upon her neck and weep; moan, "firm of purpose," sheds no tear; she has none to shed; but her eye is red and heavy with weeping and waking; and she looks at the stern and unconcerned gaoler with a proud look, expressing that she has won the reward for all her trouble past. The colouring, the textural execution, are marvellous (for these degenerate days)".
Illustrated London News