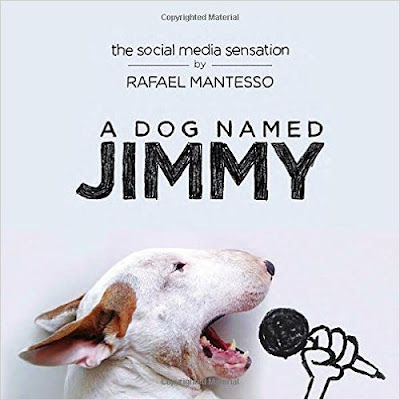 A Dog Named Jimmy: The Social Media Sensation by Rafael Mantesso
"100 new and classic images of popular Instagram celebrity Jimmy Choo the Bull Terrier
On Rafael Mantesso's thirtieth birthday, his wife left him. She took their cookware, their furniture, their photos, their decorations. She left Rafael alone in an empty all-white apartment. The only thing she didn't take was their bull terrier, whom she'd named after her favorite shoe designer: Jimmy Choo.

With only Jimmy for company, Rafael found inspiration in his blank walls and his best friend and started snapping photos of Jimmy Choo as he trotted and cavorted around the house in glee. Then, when Jimmy collapsed in happy exhaustion next to the white wall, on a whim Rafael grabbed a marker and drew a new world around his ginger-eared pup. Suddenly, Rafael felt his long-dormant inspiration—for drawing, for art, for life—returning.

The result? Hundreds of charming and cheeky images chronicling the owner and dog's relationship and adventures, including poses in a Star Wars stormtrooper helmet, passed out with liquor bottles, and as the shark in Jaws. Mantesso's Instagram feed quickly garnered fans from all over the world and caught the attention of major media outlets like Today, The Huffington Post, USA Today, and the Daily Mail, as well as Jimmy's namesake, the luxury shoe brand Jimmy Choo Ltd.

Now, Mantesso presents a definitive selection of new and classic images of Jimmy and includes the backstory of how the two became such great collaborators. As heartwarming as it is hilarious, A Dog Named Jimmy will delight animal lovers everywhere". 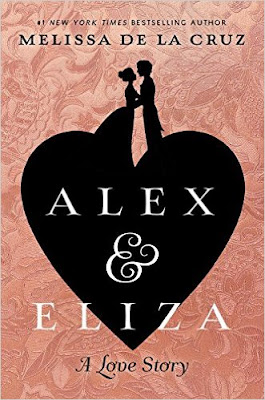 Alex & Eliza: A Love Story by Melissa De La Cruz
"From the #1 New York Times bestselling author of The Witches of East End and The Descendants comes the love story of young Alexander Hamilton and Elizabeth Schuyler.

As battle cries of the American Revolution echo in the distance, servants flutter about preparing for one of New York society’s biggest events: the Schuylers’ grand ball. Descended from two of the oldest and most distinguished bloodlines in New York, the Schuylers are proud to be one of their fledgling country’s founding families, and even prouder still of their three daughters—Angelica, with her razor-sharp wit; Peggy, with her dazzling looks; and Eliza, whose beauty and charm rival those of both her sisters, though she’d rather be aiding the colonists’ cause than dressing up for some silly ball.

Still, Eliza can barely contain her excitement when she hears of the arrival of one Alexander Hamilton, a mysterious, rakish young colonel and General George Washington’s right-hand man. Though Alex has arrived as the bearer of bad news for the Schuylers, he can’t believe his luck—as an orphan, and a bastard one at that—to be in such esteemed company. And when Alex and Eliza meet that fateful night, so begins an epic love story that would forever change the course of American history.