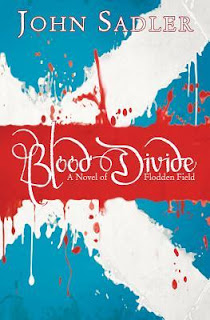 Blood Divide by John Sadler
"Gripping, visceral, and accessible historical fiction
The Battle of Flodden in September 1513 was one of the bloodiest battles ever fought on British soil, in which James IV, King of Scots, and virtually the whole of his nobility and gentry were annihilated in an afternoon along with 15,000 soldiers. Five centuries later, the slaughter still occupies a core position in the Scottish nationalist debate and in the pantheon of heroic failures. This novel puts you in the heart of the action; you'll feel the sweat and the fear, the curtain of red mist.

The narrative covers April through September 1513, focusing around a handful of key characters: John Heron, Bastard of Ford, swaggering, violent, and disreputable, the black sheep of a good English family; Sir Thomas Howard, leader of the English forces and skilled strategist; Alexander, 3rd Lord Hume, leader of the Scots, bold but impetuous; Isabella Hoppringle, Abbess of Coldstream, hub of a web of influential women throughout the Scottish borders, a woman of significant influence and charisma. 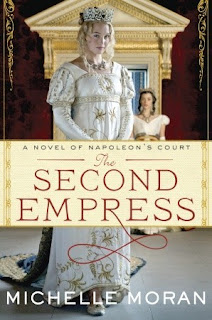 The Second Empress by Michelle Moran
"Emperor Napoleon Bonaparte will stop at nothing to marry the Hapsburg princess he hopes will bear him a royal heir, in this compelling novel from bestselling author Michelle Moran.
After the bloody French Revolution, Emperor Napoleon’s power is absolute. When eighteen year old Marie-Louise is told that the Emperor has demanded her hand in marriage, her father presents her with a terrible choice: marry the cruel, capricious Napoleon or refuse and plunge her country into war. To save her father's throne, Mary-Louise is determined to be a good wife. But at the extravagant French court, she finds many rivals for her new husband’s affection, including Napoleon’s sister Pauline, who is fiercely jealous, utterly uncontrollable, and the only woman as ambitious as the emperor himself. When war once again sweeps the Continent and bloodshed threatens Marie-Louise’s family, the second empress is forced to make choices that will determine her place in history—and change the course of her life.

Now with Extra Libris material, including a reader’s guide and bonus content" 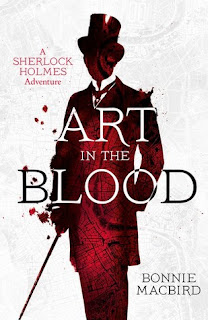 Art in the Blood by Bonnie Macbird
"At a time when Sherlock Holmes is more popular than ever, a new story written in the whip smart style of Conan Doyle but with the ticking clock and fast pace that modern readers expect
It’s 1888. A perfumed letter featuring a doubly encoded message arrives at 221B Baker street London, a snowy December, 1888. A disastrous Ripper investigation has left 35-year-old Sherlock Holmes in a deep depression and back on cocaine. The newly married Watson is summoned urgently to 221B to rouse his friend. Nothing works until the arrival of an intriguing encoded letter from a beautiful French singer, Mlle. Emmeline La Victoire. Her illegitimate son Emil (with the famous art collector and humanitarian Earl of Pellingham) has disappeared and she fears him kidnapped, and she herself has been accosted in the street.As they travel to Paris to come to her aid, a larger picture is unveiled. This same untouchable Earl may well be behind the world’s largest art theft - the priceless Marseilles Nike - and additionally the disappearance and murder of several boys working in his own silk mills. Could he have harmed his own son as well? Holmes and Watson are tasked to solve the case and bring the culprit to justice.Before they can succeed, they must navigate a complex web including a treacherous French rival detective, Vidocq, who is in love with their client; Sherlock’s oddly threatening brother Mycroft, who has his own stake in the case; and a rising tide of murders which keep the true facts just out of reach. Can Sherlock Holmes overcome the weaknesses of his own “artistic nature” to save the beautiful singer and her son, and put away the real villain behind these many crimes"? 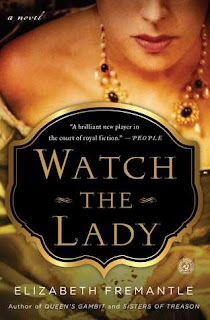 Watch the Lady by Elizabeth Fremantle
"The daughter of the Queen’s nemesis, Penelope Devereux, arrives at court blithely unaware of its pitfalls and finds herself in love with one man, yet married off to another. Bestowed with beauty and charm she and her brother, The Earl of Essex, are drawn quickly into the aging Queen’s favour. But Penelope is saddled with a husband who loathes her and chooses to strike out, risking her reputation to seek satisfaction elsewhere. But life at the heart of the court is not only characterised by the highs and lows of romance, there are formidable factions at work who would like to see the Devereux family brought down. It seems The Earl of Essex can do no wrong in the eyes of the Queen but as his influence grows so his enemies gather and it is Penelope who must draw on all her political savvy to prevent the unthinkable from happening.
Told from the perspective of Penelope and her brother’s greatest enemy the politician Cecil, this story, wrought with love, hatred and envy, unfolds over two decades in which we see the last gasps of Elizabeth’s reign, and the deadly scramble for power in a dying dynasty".