The Jewel in the Crown of Cornwall: St Michael's Mount 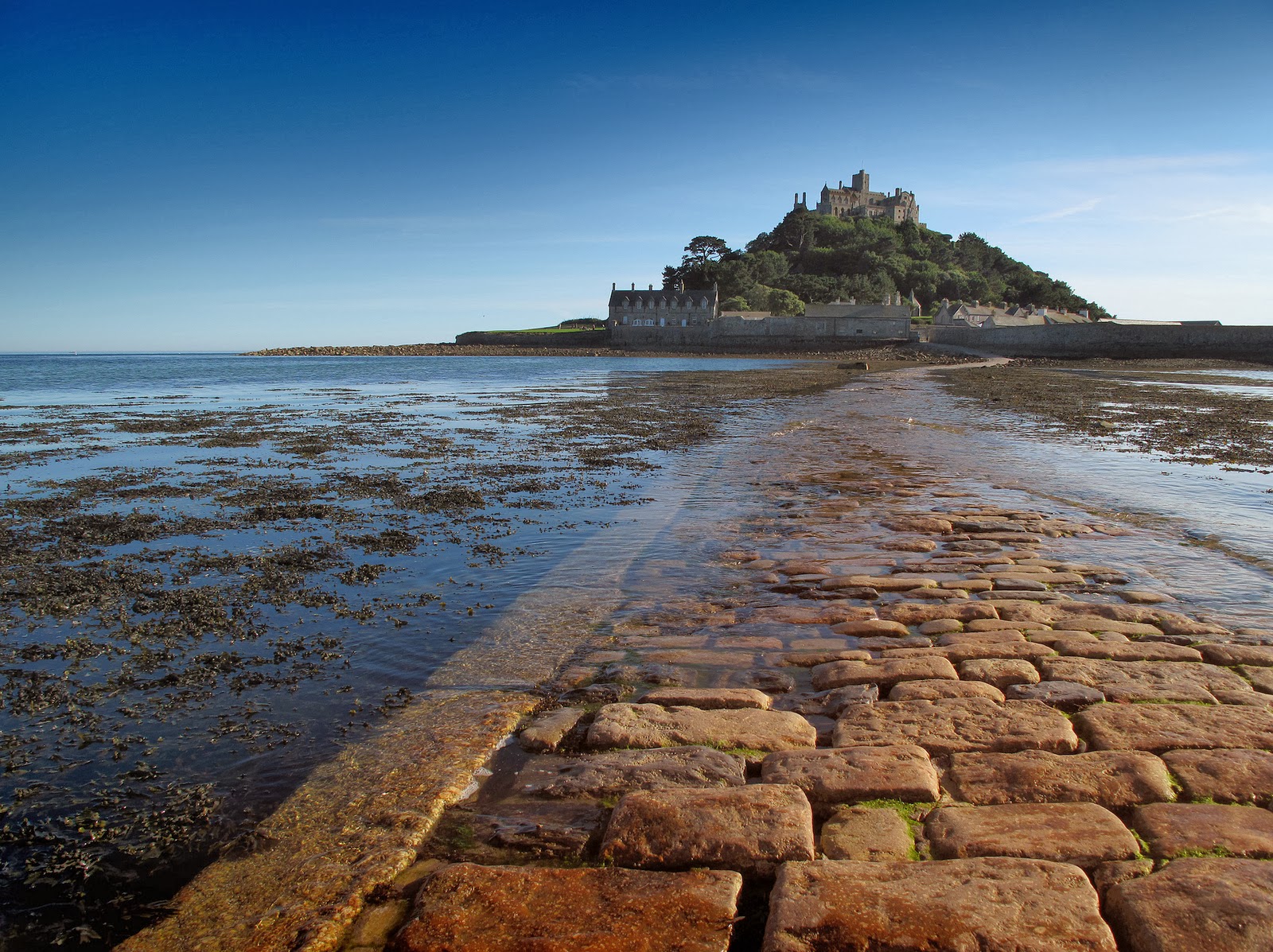 St Michael's Mount is a top priority on my bucket list. I have found it to be one of the most interesting places in the world. I first became inthralled with this unique island castle when I read "The Pale Rose of England" by Sandra Worth. In Sandra's novel Catherine Gordon and her husband Richard Plantagent aka Perkin Warbeck take refuge there upon landing in England to try and regain her husbands disputed crown. What drew me into the mount was the causeway that leads to the formidable island castle. The causeway is man made of granite slabs that are only acessable during low tide. During high tide the causeway is underwater and uncrossible but the National Trust has a amphibious vehicle named 'St Michael' that can get you across or you can ferry a boat.


"Perched on top of a great granite crag, St Michael's Mount rises majestically out of the sea in Mount's Bay. St Michael's Mount is an island at high tide and a romantic sight. The island has a small harbour on its northern shore, with picturesque houses, shops and restaurants. The island is approached via a causeway at low tide, or by boats, which land in the harbour. The terraced gardens offer superb views across the bay to Penzance, Newlyn, Land's End and the Lizard Peninsula". 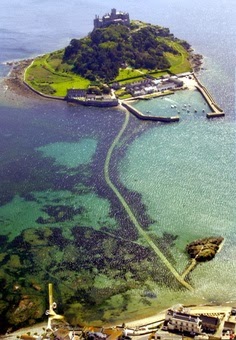 History of St Michael's Mount: The legend, "Step foot in a land where giants once walked. Legend says that a mythical giant named Cormoran once lived on the Mount, and he used to wade ashore and steal cows and sheep from the villagers to feed his gargantuan appetite. One night, a local boy called Jack rowed out to the island and dug a deep pit while the giant was asleep. As the sun rose, Jack blew a horn to wake the angry giant who staggered down from the summit and – blinded by the sunlight – fell into the pit and died".

For more on the Mount's history. 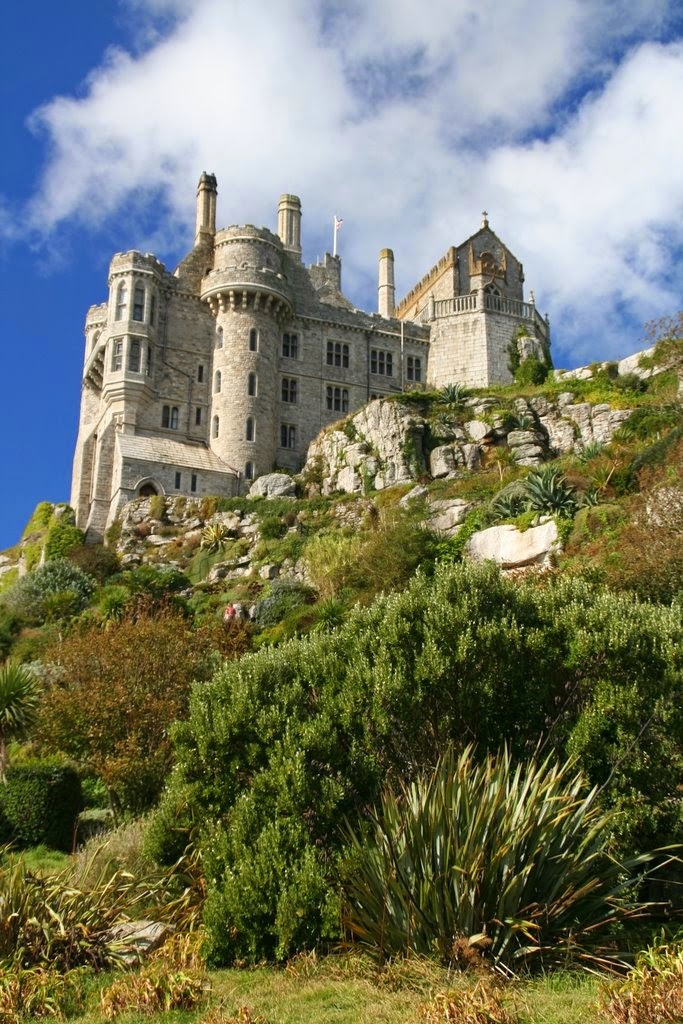 Current history of the maintenance and up keep: "In 1954, Francis St Aubyn – the third Lord St Levan – gave most of St Michael's Mount to the National Trust, along with a large endowment fund for its upkeep. He retained a 999-year lease for the family to live in the castle and a licence to show the historical rooms to the visiting public. While the National Trust now ensures the preservation and conservation of the Mount, the St Aubyn family continue to live on and manage the island, as they have done since the middle of the 17th century".

For more on St. Michael's Mount check out these interesting sites: 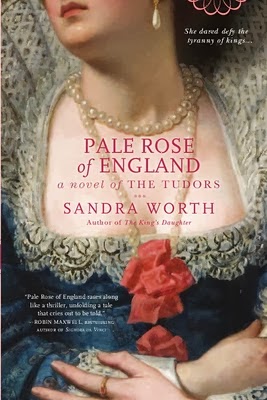 The Pale Rose of England by Sandra Worth
"From the award-winning author of The King's Daughter comes a story of love and defiance during the War of the Roses.

It is 1497. The news of the survival of Richard Plantagenet, Duke of York, has thundered across Europe, setting royal houses ablaze with intrigue and rocking the fledgling Tudor dynasty. Stepping finally onto English soil, Catherine arrives at the island of Saint Michael’s Mount, along with her husband and young son Dickon, their second child already on the way. With the keen support of Scotland’s King James IV, Richard—known in England as Perkin Warbeck—has come to reclaim his rightful crown from Henry Tudor. Based on a prophecy given Catherine by a seer that she would be loved by a king, she has no doubt Richard will succeed in his quest. But rather than assuming the throne she believed was their destiny, Catherine would soon be prisoner of King Henry VII, and her beloved husband would, unimaginably, be stamped as an imposter.

Nothing could shake Catherine’s belief in Richard and her loyalty to the man she loved. She became a favored lady-in-waiting to the queen, Elizabeth of York, but her dazzling beauty only brought her unwanted affections from a jealous king and enmeshed her in a terrifying royal love triangle. With her husband facing execution for treason, Catherine, alone in the glittering but deadly Tudor Court, finds the courage to spurn a cruel monarch and shape her own destiny, winning the admiration of a nation".
~LIZZIE~