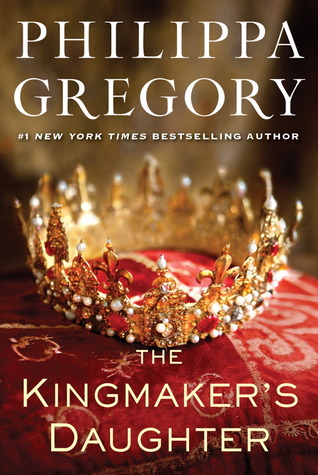 The Kingmaker’s Daughter by Philippa Gregory

There is nothing better than a good Richardian novel to get your book blood pumping. This is book number 4 in the Cousins’ War series. I really enjoyed this novel but not nearly as much as I love Lady of the Rivers. I love that PG’s novels in this series usually pick up exactly where the last one left.  Shifting from Jacquetta Woodville to Anne Neville the kingmaker’s youngest daughter. Richard Neville aka the Kingmaker had a merciless ambition and he wanted his girls to sit on high in England’s court but everything has its price and the Neville’s would pay dearly for it.

Anne and her older sister Isabel Neville were the only children of the famous Earl of Warwick.  The King making Earl held great power and popularity through out England. He was also included in the handful of nobility that had a major role in the War of the Roses. Warwick had the ward ship of all the York boys through their adolescents Edward, George, and Richard Plantagenet all were in Warwick’s home at one time or another. Warwick had a dream of seeing a puppet king on the throne of England and he wanted to be the one pulling the strings.  His ambition was so great that he wanted to make sure that at least one of his daughters were married to the puppet king. When Edward of York became Edward IV Warwick was a big part of the events and their relationship was great until Edward married the beautiful commoner Elizabeth Woodville with out warning.  Warwick had been working on a French marriage for Edward and it was all for nothing now that he secretly married. Warwick saw the marriage as a personal slight on him and it started to deteriorate what had been a positive relationship of so many years.  The relationship could never really be healed after this point because the rift became too great.

Immediately afterwards Warwick had begun plotting and he moved on to his back up plan. He successfully married his eldest daughter to King Edwards’s younger brother George Duke of Clarence. His ultimate plan was to replace Edward IV and Elizabeth Woodville with his daughter Isabel and George. Things were doomed to fail for them but his girls really suffered the most by his hand. Isabel had the most reason to be upset. Early on in her marriage to George Isabel had become pregnant and she was forced to flee with her whole family.  Edward had foiled his mentor’s plans and they went to hide in Calais. A wicked storm took over there ship on the way there and they were also not permitted to dock Calais. She went into early labor from duress and her child was stillborn. Isabel swore afterwards that it was a witch’s wind that had taken over her fathers ship. She also swore that it was none other than Elizabeth Woodville and her mother that had conjured it up.

In this novel in the series Elizabeth Woodville is a force to be reckoned with in her own right….fierce and very deadly.  Warwick had basically declared war on her when he had stolen her father and brother and murdered them in the name of the law when in reality it was out of pure hatefulness for Elizabeth.  He executed them with no authority and Elizabeth would never forgive or forget it. Elizabeth would lay a curse on two names and two names alone. Isabel Neville is convinced that it is she and her sister’s names on that piece of paper.

Anne Neville had made it through so much with her sister at a young age it really was not an easy life for these girls even in the beginning. Warwick had sided Anne at one point to Margaret of Anjou the she wolf of France. Anne married Margaret’s son Edward and they all lead a one last-ditch effort attack into England. They planned on recapturing the crown from Edward IV.  The planed failed before it had even begun and it left Anne a widow in war torn England. Stuck with Margaret Anne had not known what to do but when they were captured her heart skipped a beat when she saw again her childhood friend Richard Duke of Gloucester

In a complete turn of fortunes wheel Anne is in some sorts of favor at court. She also gets to see her sister Isabelle but that quickly turned sour when it became apparent that Anne was more of a prisoner than an honored guest. Anne was presented with an escape route and it was a very handsome way to gain control of her life. She had always loved Richard and she even fancied herself marring him as a child. Yet she still could not believe it might actually truly come to pass.

Richard and Anne put the past behind them and had moved on as an untied front. At court at the time it seemed that everyone was plotting, possibly poisoning, and what made it worst of all is the Woodville witch held all the power. They fled to escape the pressures of court. It was not long before they had received word that Edward has suddenly passed away. He had named Richard as his protector of his young heir. Elizabeth Woodville would never just “let” Richard be protector and so began the mad dash to the position of power over a defenseless child heir.

4.5/5 Such a good book but “Lady of the Rivers” was better. It was a delightful follow up to it. I cannot wait for Elizabeth of York: “The White Princess” which will release July 23, 2013. PG has made another wonderful addition to the Cousins’ War series. I hate to admit this but Philippa’s spin on Anne Neville was way better than Jean Plaidy’s version. That was the only novel of Jean Plaidy’s that I did not like because Ann was portrayed as a week woman but Gregory empowered her and made her strong to me, as she should be for a woman who lived her whole life in the turmoil of the War of the Roses.