Book Review AT THE KING'S PLEASURE by Kate Emerson 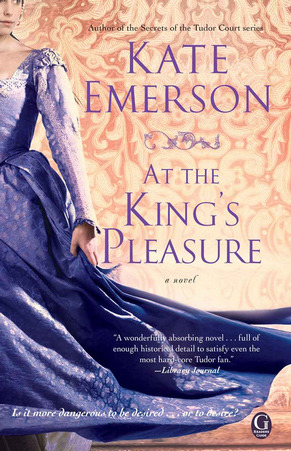 I always gush about Kate Emerson and it is because I really enjoy her novels. I love how each one centers on one juicy Tudor court secret. At the King’s Pleasure is no exception to that either. I know I am really behind on this one but I admit once I got into about page 3 or four I was hooked into the story completely. I ended up not being able to put it down and finished it in only a few days. I have to mention that I am extremely honored to be quoted in the first few pages because this series is a near and dear to my heart with Pleasure Palace, Between Two Queens, By Royal Decree, and the latest addition At The King’s Pleasure. Releasing this summer on August 8 is another addition to the series “The King’s Damsel”. Thank you Kate for the mention it is a pleasure to continue reading your delicious novels. I hope that there are many more secrets in the Tudor court.

I have tried not to inhale all the Tudor stories because once you read them you cannot undo what you have read and I want to save some of the better stories for authors I hold near and dear. The 3rd Duke of Buckingham I really held back and waited on. When I heard Kate was working on him I could not wait to see what she came up with. Kate is a Tudor Queen and really has done her historical homework and to verify this check out her who’s who of the Tudors site. It does have some spoilers so be warned. Kate does the Duke the justice he deserves. The 3rd Duke of Buckingham son of Henry Strafford 2nd Duke of Buckingham. King Richard II had executed his father for treason. Did I also mention that his mother was Katherine Woodville who was sister to Edward IV’s queen Elizabeth Woodville? Katherine and Henry’s story is one of the most compelling Wars of the Roses stories. For a really good read on the Dukes parents “The Stolen Crown” by Susan Higginbotham is amazing. It will forever change your perception of the Dukes father and mother and what hand they had in the war.

The Duke of Buckingham was a headstrong man and did not take his position as head of the family lightly. His two younger sisters Anne and Elizabeth would be forever under his watchful eagle eye of their lives. With Henry VIII fresh on the Tudor throne the Duke was the highest-ranking noble in land. He felt it was his duty to live up to the title in an arrogant jerkish fashion by basically bullying everyone around him. Good thing this novel was not only about the Duke because I probably would have worn out on him pretty fast. I am glad that the focus most of most of the novel is on his stubborn sister Anne.

Anne Strafford what a woman she is someone I could like in real life, brave, intelligent, and fun-loving Anne was a beautiful addition to the Tudor court. Having been previously in a loveless marriage Anne was sent to Queen Katherine of Aragon after her brother secured her a place at court. I love Reading about king Henry’s early reining years everyone at court at the time was so happy and carefree. There was no distrust, Jousts, Masks, banquets, and all the hunting the court could ever want. Anne of course took part in all of it she reveled in it. Anne knew her brother was demanding that she remarry. Her choice ended up on the “stable suitor” rather than the “passionate poor suitor”. Anne married Lord Hastings aka George and their marriage would be anything but rocky at best. To me it seemed that George never really had any confidence in his marriage. I think he must have felt like the wolves of court were always lurking right behind his wife. The wolf this time around happened to be one of the king’s close companions William Compton. William was a notorious womanizer but neither he nor Anne could help the fact that this magnetic pull was something that neither of them could ignore forever.

In a surprising twist the whole novel took a big turn when the King began to take notice of Anne, While Queen Katherine was “breeding” King Henry wandered and this time around the court he sent William Compton to settle the water with Anne. With one thing leading to another William was found in Anne’s chambers in an uncompromising position. Figures that her bully of an older brother walked in just the wrong moment. Being the biggest jerk ever he did not even ask her the truth an instead he just locked her up and spoke with her husband about what had happened. Both men ended up locking Anne up and taking her to a despicable nunnery.

I felt sorry for Anne she was so venerable just for being a woman. Guilty with out even being questioned or allowed to speak. The really sad part is they never even asked or wanted the truth. When her husband finally came to his senses his marriage was in complete shambles and the distrust between the pair was rife. Some couples would never survive this amount of distrust but some can grow from it. Anne and George had to find their own way with out outside influences Tudor or not. Determined to make it Anne and George would have to wade their way through the court intrigue, amorous love masked as a courtly love and the execution of a loved one you never realized how much was loved until it was too late.

4.5/5 Loved it but since I have been out of the Tudor loop for a bit it was a little hard to keep mental notes on all the titles that were thrown around. I found this one was a great addition to the series because it seems each novel has a completely different type of relationship. Plus I loved reading about the children of the War of the Roses. Scandal always seemed to touch that Stafford family but this time Anne and George had each other’s love and that is what matters the most even if you are a Stafford.