A Rewind To Nefertiti by Michelle Moran 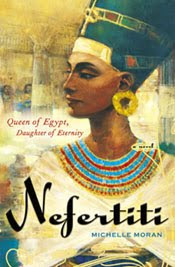 I know what you are thinking this was Michelle's break out novel but Nefertiti is constantly in my thoughts and I can not wait to read this novel.

"The sweeping story of a powerful Egyptian family, Nefertiti: A Novel tells the tale of two sisters, the first of whom is destined to rule as one of history’s most fascinating queens.

Beautiful Nefertiti and her sister, Mutnodjmet, have been raised far from the court of their aunt, the Queen of Egypt. But when the Pharaoh of Egypt dies, their father’s power play makes Nefertiti wife to the new and impetuous king. It is hoped she will temper King Amunhotep’s desire to overturn Egypt’s religion, but the ambitious Nefertiti encourages Amunhotep’s outrageous plans instead, winning the adoration of the people while making powerful enemies at court. Younger yet more prudent, Mutnodjmet is her sister’s sole confidant, and only she knows to what lengths Nefertiti will go for a child to replace the son of Amunhotep’s first wife.

As King Amunhotep’s commands become more extravagant, he and Nefertiti ostracize the army, clergy, and Egypt’s most powerful allies. Then, when Mutnodjmet begins a dangerous affair with a general, she sees how tenuous her situation is at her own sister’s court. An epic story that resurrects ancient Egypt in vivid detail, Nefertiti: A Novel:

“Brings ancient Egypt to life as two royal sisters struggle to find fulfillment and happiness—one craving ultimate political power, the other desiring only to follow her heart.” India Edghill, author of Wisdom’s Daughter

“There haven’t been two more fascinating or outrageous siblings since the Boleyn sisters burst onto the pages of historical fiction. Nefertiti is totally obsessive reading.” Robin Maxwell, author of The Secret Diary of Anne Boleyn"