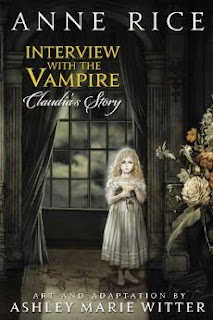 What a fun short read. As many of you know before I became obsessed with historical fiction I was really obsessed with Anne Rice’s series “The Vampire Chronicles”. The series actually led me to HF because I realized it was not just the vampires I loved but it was that Anne’s vampire story lines followed the characters thought out history. I loved following them through the different eras. It made each book really unique and this one is no different from the others.

If you have seen the movie “Interview with the Vampire” which stars dreamy young Tom Cruise and Brad Pitt then you know that Claudia is the child vampire that Lestate (Tom Cruise) created to keep his beloved Louis (Brad pitt) with him. Lestate created an emotional bondage between him and Louis when he created her and now Louis could never leave. He was going to leave Lestate because he could not tolerate his barbaric vampire ways. Louis was always a sensitive soul and at one point or another he refused to kill humans and had resorted to killing rats to feed. When Claudia was created Louis instantly had a soft spot for the girl that would never grow up. Lestate’s plan had worked but at what cost, making a vampire child was against the vampire code in the novels and he knew it. Yet Claudia and Louis were kept in the dark about Lestate’s past history and they had no inkling of what the future held for the pair.  A dark future lay just across the water for Lestate and Claudia and there will be a price to pay and ignorance will not be a tollerated excuse.

This graphic novel is from Claudia’s prospective which has not been done before. It followed very close to the original novel and even the movie. It even has that dark feel that I love about the series. I enjoyed this novel it was like reading the story all over again new. It was fun and fast paced and was nothing like the nice Edward from “Twilight”. The highlight of the novel is the artwork it is incredible, so detailed and is done in all sepia tones except the bright red blood.

5/5 Very well done art work but very violent. If you can stomach a more violent vampire series then Rice is the way to go. I included below a few pictures I took of the novel to show the style of the novel. 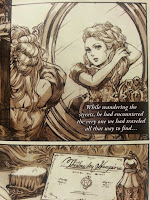 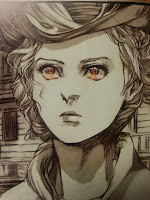 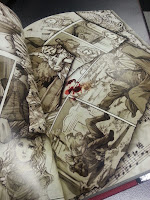